Fruit latex of F. botryocarpa was used to treat sores, wounds and other superficial skin infections in East Sepik Province, Papua New Guinea (PNG) [1-3]. Staphylococci are the principal causative agents accounting for 30% to 50% of wound infections [4]. Preliminary antimicrobial screening has shown activity of methanol extract of latex (FL) on Staphylococcus albus and Staphylococcus aureus with inhibition zones of 28 mm and 26 mm respectively [5-7].

Investigation of the active constituents from the latex of F. botryocarpa centered on alkaloids. Raw fruit latex was extracted with methanol and filtered separating the bioactive filtrate (F2) from the non-bioactive filtered (F1). (F2) was confirmed as predominantly alkaloids by Dragendorff and Mayers test [8]. By means of preparative chromatography three fractions, (1), (2) and (3) were isolated from (F2). These fractions showed strong activity against Escherichia coli, S. aureus and two bacterial colonies types isolated from an infected folliculitis [9]. This study attempts to identify chemical structures of these alkaloid isolates.

Pricked fruits with latex protruding from petiole and fruit bud were collected in 40 ml polyethylene sampling bottles at Bulolo, PNG.

Combined latex, 18 ml was extracted with 50 ml methanol and subject to vibration in a flask shaker (Stuart FS-1) at 200 oscillations per minute for 20 minutes. The process was repeated three times to obtain the primary extract (FL). Insoluble (F1) and soluble (F2) fractions were recovered by gravity filtration using 125 mm and 185 mm using whatman filter papers and concentrated on a BUCHI rotary evaporator under reduced pressure followed by drying under vacuum.

White gummy-like substance, were collected as filtered (F1) and air dried at room condition to solidify. The soluble filtrate (F2) was concentrated on a BUCHI rotary evaporator under reduced pressure followed by vacuum drying. (F2) gave a golden - yellow paste.

1 g of F2 was dissolved in 10 ml MeOH and deposited on a horizontal thin line at the bottom of a preparative silica gel plate. The plate was placed in a chamber containing the solvent, acetone/toluene/ ethanol/ammonia (40:40:6:2) mixture [10]. Three spots of Rf0.26, Rf0.14 and Rf0.07 resembling bands developed earlier were ideally developed (blue fluorescence) and marked under UV light at 254 nm. The three fractions were scraped off the glass plate (20 × 20 cm) into separate screw cap conical flask (100 ml). Each fraction was dissolved in Me OH (3 × 30 ml) vibrated at 200 oscillations per minute for 10 minutes and filtered. The filtrates were concentrated in vacuo at 68°C (BUCHI) and further vacuum dried yielding fraction (1) 2.10 mg, (2) 4.20 mg and (3) 6.13 mg. 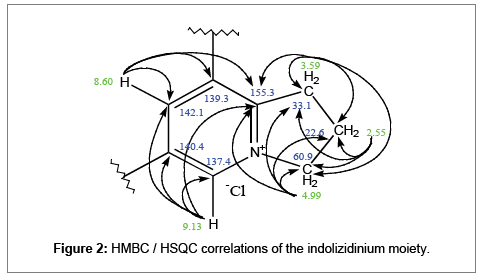 Table 3: 2D-HSQC and HMBC correlation assignments at selected proton and carbon systems of (2).

The two singlets resonating at δ 8.60 and δ 9.13 in the aromatic ring is likely in long range 1H-1H coupling at meta-meta positions. Their correlations to the quaternary δ 140.4 (2JC-6) and the presence of the other quaternary carbon δ 139.3 denotes ortho-para disubstituted carbons. Hence, depicting 1, 2, 3-trihydroindolizidinium moiety (Figure 3). The compound was identified as ficuseptine (1) on the basis of its 1H-NMR spectral comparison with ficuseptinechloride (4) and other literature data (Rf and melting point) [11,12] (Figure 7). The compound was identified as ficuseptine (1) on the basis of its 1H-NMR spectral comparison with ficuseptinechloride (4) and other literature data (Rf and melting point) [11,12] (Figure 8). The compound was identified as ficuseptine (3) on the basis of its 1H-NMR spectral comparison with ficuseptine chloride (2), ficuseptine (1) and other literature data (Rf and melting point) [11,12].

Spectroscopic assessment with 1H-NMR, 13C-NMR, IR and MS showed all fractions, (1), (2) and (3) to be ficuseptine. Fraction (2) was determined to be ficuseptine chloride based on 1H-NMR, 13C-NMR, IR and MS data. This is the first time this compound was reported in F. botryocarpa. With consistent spectral data fractions (1), (2) and (3) are ficuseptine bearing different anionic components. These ficuseptine derivatives are extremely polar and cationic. It was found that the fruit latex is not active in wet weather [6]. This may indicate that the stable ficuseptine is of bioactive significance vice versa.

More-over there appears an association between the gummy precipitate (F1) and the milky latex (FL) synonymous of the ficuseptine behaving as an emulsifying agent.

Copyright: © 2015 Wau J, et al. This is an open-access article distributed under the terms of the Creative Commons Attribution License, which permits unrestricted use, distribution, and reproduction in any medium, provided the original author and source are credited.