Isolation of Two Bioactive Compounds from the Stem Bark of Lycium inerme and their Biological Activities against H. influenzae and S. pneumoniae in Mthatha, Eastern Cape, South Africa

Lycium inerme is a plant used by traditional healers in the Eastern Cape Province, South African against respiratory illness. Different solvent extracts of Lycium inerme was screened against clinical isolates of Haemophilus influenzae and S. pneumoniae pathogen. The dichloromethane extract was the most active against these two pathogens. Bioassay-guided column chromatography of dichloromethane extract led to the isolation of three compounds which were very active against H. influenzae and S. pneumoniae. Three active compounds:a coumarin (7-hydroxy-6-methoxy-coumarin) and two triterpenoids, Ursolic acid (3-oxo-19-hydroxylpomolic acid) and Moronic acid (3-oxoolean-12-en-28-oic acid) were isolated from the dichloromethane fraction. The study highlights the characterization, structural elucidation and biological activities of the two compounds against H. influenzae and S. pneumoniae.

Medicinal plants are useful sources of drugs and the majority of individuals in developing countries rely on their uses [1]. It has been reported [2] that crude extracts of medicinal plants justified their use in folklore medicine in the treatment of wounds and ulcers. In view of this, the World Health Organization is encouraging all countries to preserve and use medicinal plants in their national health systems [3].

Lycium inerme , belongs to the family Solanaceae. It is a spiny or spicky tree or shrub that is also often known as the Matrimony vine [4]. Leafy spine-like branches are borne in opposite pairs, the leaves are light green, glossy and hairless with a soft, leathery texture and cream coloured to green yellow flowers are produced from august to February [5]. The antioxidant radical (Fructuslycii) from Lycium family has been used as medicine in many countries, particularly in China where the herb is been used as emenagogue, diuretic, antipyretic, tonic, aphrodisiac, hypnotic and hepatoprotective agent [4].

The plant has been extensively studied in China, India and South Korea. L. inerme is a relatively common species with a wide distribution range in South Africa, extending from the Cape Peninsula in the Western Cape, into Eastern Cape, through Kwazulu-Natal to Swaziland, Mpumalanga and Limpopo. Lycium species is commonly used for decoration of gardens, about 50 species is grows in Africa, of which around 15 species are found in Southern Africa [6]. Several species of this genus have been used in folk medicine as sedatives and for the treatment of digestive disorders, rheumatism, headache, arthritis, diabetes, toothache, coughs and chest pains [7]. Lycium roots or extracts are used to bring down or sooth the blood temperature and thus help in lessening fever, irritability, sweating, and thirst. The cooling properties of Lycium are also effectual in impeding nosebleeds; diminish vomiting of blood and also relief coughs and wheezing caused by excessive heat prototypes [8].

In the literature, there are many studies about antibacterial, antifungal, antiulcer, anticancer, antiviral, antifertility and antioxidants activity and the chemical composition of Lycium species [8,9]. Lycium fruits and berries are highly useful for safeguarding the liver from injuries caused by exposure to toxins. Roots are useful for safeguarding against parasympathetic nervous system. They also, lower blood pressure, loosen the muscles, lower fever and reduce excess body temperature in malaria patients [8]. Lycium stem bark contains betaine, beta-sitosterol, the berries contain physalien, carotene, vitamin B1, B2 and C. The root contains enclosed cennamic acid and psyllic acid. Some of the commonly found compounds of L. inerme include, Coumarin (Scopoletin). In South Africa, there are a paucity of information concerning the chemical and the biological studies of Lycium inerme

The aim of the current study was to determine the active compounds in different extracts of Lycium inerme , based on their antimicrobial activities against isolates of Haemophilus influenzae and S. pneumoniae in South Africa.

The stem bark of Lycium inerme was collected from Lusikisiki in the Eastern Cape Province, South Africa, from June 2010 to December 2011, based on its ethnomedical application in the treatment of respiratory tract infections. The plant was identified and authenticated by Taxonomist (Immelman K.L.) in the Department of Botany, Walter Sisulu University, South Africa. Voucher specimen MI 008 was deposited at the University herbarium.

The ground plant material was soaked in different solvent systems (n-Hexane, Dichloromthane, Ethylacetate, Methanol and Water) for 72 h each with frequent shakings, as previously described [2,3]. The samples were suction filtered through Whatman No 1 filter paper. The filtrate was evaporated to dryness under reduced pressure using a rotary evaporator. The crude extracts were left to air-dry at room temperature until it was completely dry and then stored in the dark for subsequent steps. After plant extracts had dried, the percentage yield of each extract Hexane (65 g), Dichloromethan (56 g), Ethylacetate (45 g), and Methanol (12.8 g) [2,3].

Detection of zone of inhibition against microbial agents on TLC bioautography: The agar overlay or immersion bioautography was used as previously described [9,10]. This is where chromatograph plates (TLC plates of 0.25 mm thickness) were placed into a beaker containing a known solvent system and the inoculum (agar seeded with pathogens, for example, H. influenzae , S. pneumoniae , and C. albicans were rapidly distributed over the TLC plate with a sterile Pasteur pipette. After solidification of the medium, TLC plates were incubated overnight at 37°C in a plastic-bowels lined with moist cotton wool. The bioautograms were sprayed with an aqueous solution (2.5 mg/ml) of tetrazolium salt (3-4, 5-Dimethylthiazole-2-yl-2,5-diphenyltetrazolium bromide (Aldrich, Gillingham, England) and incubated at 37°C for 2 h. Active compounds appear as clear spots against a purple coloured background due to formation of formazen dye [11].

Microorganisms are media sensitive thus the bacterial strains were maintained on tryptic soya agar slants. All the cultures were introduced aseptically (using a heat-sterilized wire loop) into 250 ml Elernmeyer flasks containing tryptic soya broth. To achieve a homogenous distribution of microorganism in the nutrients, the cultures were shaken during incubation at 37°C for 24 h using a LABLINE ORBIT shaker. All media were autoclaved at 121°C for 15 minutes prior to inoculation [12].

Inoculums for the assay

Tryptic soya agar (TSA) was used as a solid media for the bioautographic overlays. The molten media were maintained in water bath at approximately 42°C and seeded with microorganisms from the tryptic soya broth; 10 ml of the broth culture was introduced into 100 ml of tryptic soya agar. The optical density at 540 nm (OD540) of the agar was measured with spectronic 21D (Milton Roy) UV/VIS spectrophotometer and OD540 equal to 1 corresponds to approximately 107 cells/mL [13].

Crude extracts and compounds were developed in duplicate on separate TLC plate using an appropriate solvent system. One plate was sprayed with Vanillin-Sulphuric acid spray reagent and the other with the DPPH spray reagent. The plates were placed side by side and components showing antioxidants activity were identified, examined and recorded after 30 minutes (Figure 1). Yellow spots against a purple background when sprayed with DPPH showed a positive activity [16]. 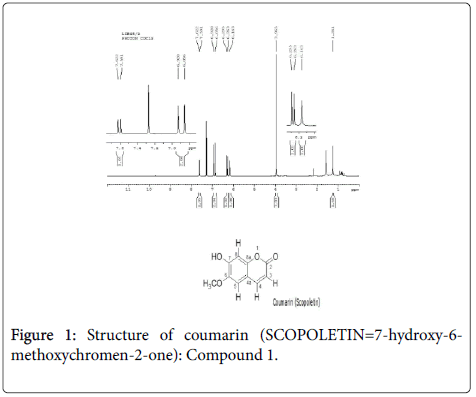 Coumarin (Scopoletin), is a glycoside (Scopolin) formed by the action of the enzyme Scopoletin glucosyltransferase and commonly found in the roots of plants in the genus Scopolia like Scopolia carniolica or Scopalia japonica in chicory, in Artemisia scoparia , in the passion flower, in Brunfelsia , in Viburnum prunifolium. It can also be found in vinegar, some whiskies or in dandelion coffee (Table 1).

The chemical shifts in the 13CNMR spectrum were typical for pentacylic triterpenes. The presence of a set of vinylic carbons occurring in the 13CNMR at σ 143.1 and 129.1 was characteristic of a 3-oxo-19-hydroxylpomolic acid. Compound 2 was thus characterized as a triterpene and was identified as ursolic acid by the close match of the 13CNMR data (Table 2) with that compiled [17] (Figure 2). 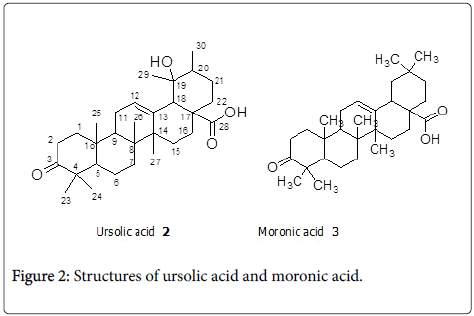 In this study two compounds were isolated, namely; Coumarinescopoletin (1) and a pentacylic triterpene (2). Compound 1 has a formula C10H8O4, molecular weight of 192.17, yellow to beige crystalline powder, a melting point of 200-207°C. Its synonyms are 7- hydroxy-6-methxycoumarin. Coumarin derivatives are used widely as anticoagulants (such as warfarin -OH group is attached at position 4) for the treatment of disorders in which there is excessive or undesirable clotting, such as thrombophlebitis, pulmonary embolism and certain cardiac conditions. It was reported [18-20] that the pharmacological properties of scopoletin (SCT) molecules might be useful in the treatment of bain disturbances associated with dementia. Other beneficial properties of SCT are its antioxidant radical scavenger and anti-inflammatory activities. [18] Several studies suggest that appropriate antioxidants can prevent neurode-generation as reviewed [18].

Of the independent sample extracts, dichloromethane ethyl acetate and methanolic extracts showed good antibacterial activity against both bacterial strains (Tables 3 and 4). On the other hand good antibacterial activity was recorded in L. inerme against S. pneumonia than H. influenzae . Studies have shown that DCM/EtoAc extracts of L. inerme are rich in antimicrobial agents that could be targeted and isolated in a bioassay-guided fraction [16]. The TLC agar overlay method was observed to be a highly effective method for providing a quick visual analysis of the location and level of antimicrobial agents in the plant extracts. L. inerme extracts in this study leads to the conclusion that active constituents in these crude extracts are among the lipophilic (non-polar) group of compounds. Although hexane extracts are highly non-polar compounds than DCM, the two solvents generally extract non-polar classes of compounds compared to methanolic extracts, which are mostly polar compounds (Figures 3 and 4). 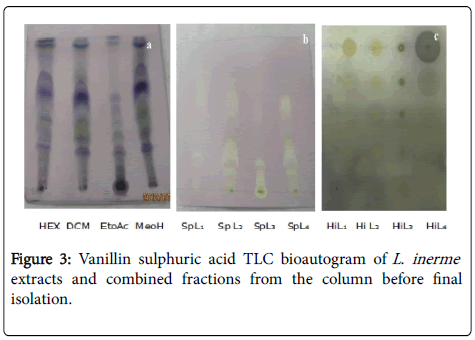 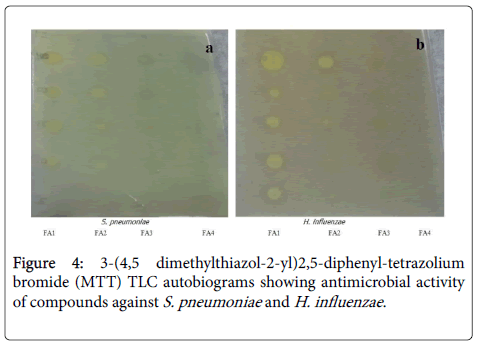 L. inerme stem bark screened in this study may have potential medicinal and antimicrobial activity against H. influenzae and S. pneumoniae . Bioassay showed that compounds with Rf-values of 0.67 to 0.80 were very active against H. influenzae and S. pneumoniae . Two active compounds:a coumarin (7-hydroxy-6-methoxy-coumarin) and two triterpenoids:ursolic acid (3-oxo-19-hydroxylpomolic acid) and moronic acid (3-oxoolean-12-en-28-oic acid) were isolated from the dichloromethane fraction. These compounds showed some antimicrobial activity, therefore L. inerme stem bark can be used as a source of alternative medicine, new pharmaceutical and health care product that can be used as a therapeutic agent, a starting material for synthesis of drugs or as a model for pharmacologically active compounds.

The authors are grateful to Walter Sisulu University, National Research Foundation (NRF), South Africa and the Medical Research Council (MRC) for financial assistance. We are indebted to the technical staff of the department of Medical Microbiology, Walter Sisulu University (WSU) and the Chemistry Department, University of Botswana for the technical assistance. Special thanks go to the management and technical staff of the National Health Laboratory Services, Nelson Mandela Academic Hospital, Mthatha and the Laboratory for Emerging and Infectious Diseases, Tohoku University, Japan for technical assistance provided during this research work.

Copyright: © 2018 Morobe IC, et al. This is an open-access article distributed under the terms of the Creative Commons Attribution License, which permits unrestricted use, distribution, and reproduction in any medium, provided the original author and source are credited.