Methanolic Extract of Wedelia trilobata in Antiproliferation and Apoptotic Activity.

Herein, we report extraction of biologically important isolates from medicinally valuable plant Wedelia trilobata. The biological activities viz., anti-proliferative activity and cytotoxic effect of the methanolic extract of Wedelia trilobata was investigated by Thymidine uptake assay, wound healing assay and MTT (3-(4,5-dimethylthiazol-2-yl)-2,5-diphenyltetrazolium bromide) assay, respectively. In addition, apoptotic activity was also examined through nuclear staining and DNA fragmentation assays. The IC50 value of the methanolic extract for the growth inhibition of MEG-01 cells was found to be 80 μg/ml under which the normal HEK-293 cells were resistant to the toxic effect. Concentration and time dependent studies in Thymidine uptake and wound healing assays revealed the prominent antiproliferative activity against MEG-01 at the concentration of 80 μg/ml for 48 h. The nuclear staining and DNA fragmentation assays also confirmed that the methanolic extract induces apoptosis in MEG-01 cells.

Drugs for major human ailments including cancer are developed by natural products. Though many drugs of natural origin do exist, search for new anti-cancer agents is still necessary to increase the availability range and to find drugs less toxic while being more effective. Molecular extracts of medicinal plants have proven to be a reliable source of new and effective anticancer agents. These medicinal plants are rich in organic compounds and small molecules which are more stable with interesting biological activities and free from contaminants of chemical and biological origin. Majority of the world population is dependent upon traditional medicines. A total of about 35,000 plant species are being used for medicinal purposes through-out the world. Considering the plants with medicinal values, Asteraceae is the largest family of flowering plants and renowned for its traditional medicine properties like Wedelia calendulacea plant possessing hepato-protective activity in which it revitalizes the liver and is used to treat liver dysfunction [1], methanol extracts of Wedelia trilobata are known to be having potent antioxidant and anti-bacterial activity [2], Vernonia cinerea used as an therapeutic agent in malarial fever and various gastro-intestinal disorders [3,4], Bidens alba possess anti-malarial activity in its ethanol extracts [5], Acourtia thurberi has shown reduction of the blood sugar level in mice [6], Jurinea consanguinea and Evax pygmaea are the other Asteraceae family plants having antioxidant properties [7,8].

Leukaemia being the target in the present study, the most common malignancy is found among the people aged below 20 years. It is the hemato-oncological disease characterized by proliferation of neoplastic cells of the hematopoietic system into the blood, bone marrow and other tissues. Keeping in mind the treatment like combining chemotherapy with antitumor drug is assumed to reduce the limitations and drawbacks of chemotherapy alone. Antitumor drugs for the combining treatment should be preferably of about natural agents so as to nullify the side effects and to increase the effectiveness of the treatment. To derive such compounds initial screening for anti-leukemic activity is necessary. Natural compounds having apoptotic effect is best characterized as an antitumor agent. Hence molecules with anti-leukaemic and apoptosis properties will be preferred for the study. Apoptosis, the programmed cell death is usually characterized by the cell shrinkage, nuclear condensation, chromosomal DNA fragmentation and formation of apoptotic bodies [9,10]. During apoptosis the cytochrome C, a protein in the mitochondria activates the caspases which finally cleave poly ADP-ribose polymerase (PARP) and activates caspase-activated DNase to fragment DNA [11]. In contrast, the medicinal plant Wedelia trilobata possess the biological activities like antioxidant, antibacterial, DNA protecting activities and mulluscidal activity [12]. This plant is widely found in the Western Ghats of Karnataka. The flower of Wedelia trilobata plant resembles the marigold, which grows singly at the top of the stem [13]. In consideration with the features of plant, methanol extracts of Wedelia trilobata has been taken up to elucidate the antiproliferative and apoptotic activities.

Details of the selected plant for the study

Wedelia trilobata belonging to the Asteraceae family has high ecological tolerance and grow by spreading mat like perennial herb with 30 cm in height, rounded stem and fleshy leaf. They were collected in western ghat range of Karnataka during the month of November.

The collected plant samples were washed in tap water thoroughly and kept in shade to dry for 12 days. The dried plant material which includes shoot, leaf and stem were powdered to obtain homogeneous mixture. The hydrophilic compounds were extracted for the pre characterization using polar solvents like methanol; ethanol and ethyl acetate through soxhlet extraction method which is widely used methodology in plant analysis to ensure the potential active constituent are not lost 150 to 200 ml of methanol, ethanol and ethyl acetate was used one after the other through which nearly 30 g of compound was obtained from each extracts after concentrating under vacuum using rotary evaporator. The basic pre characterization tests like anti-oxidant and antibacterial assays of the crude extracts strongly favoured the methanol extract for further analysis.

Cytotoxic effect was determined through MTT assay [15] in which the cells were allowed to affix for 24 h in 12 well-plates. The methanolic extract of required concentration was prepared in RPMI 1640, DMEM and dimethyl sulfoxide solvent (DMSO). Extracts of concentration ranging from 0-120 μg/ml were added to the cells in triplicate at different time interval (4, 8, 12, 24 and 48 h). The media was removed from each well and replaced with 100 μl of 1 mg/ml MTT solution prepared in serum free medium and incubated for 4 h. The solution of MTT was then replaced by 200 μl of DMSO which will dissolve the forrnazane crystals. The spectrophotometric absorbance was measured for each well at 495 nm. The mean of triplicates was deduced to express IC50 value (IC50 = the concentration of the treated cells reduced by 50% the optical density with respect to the untreated cells).

Effect of methanolic extract on proliferation rate of MEG-01 and HEK-293 cells was elucidated through Thymidine uptake assay [16,17]. The cells were seeded at the range of 5 × 104 cells per well and cultured for 24 h at 37°C with 5% CO2 in RPMI 1640 and DMEM media, respectively 1 μl (μCi/ml) of [3H] Thymidine was added and followed by the addition of different concentration of methanol extract (ranging from 40, 60, 80, 100 and 120 μg). After 48 h the medium was removed, cells were collected and processed. The radioactivity was measured by liquid scintillation counter, and the proliferation rate was correlated.

In this assay, 5 × 104 MEG-01 cells were seeded and cultured in 6 well-plates in the RPMI 1640 medium supplemented with 10% FBS at 37°C with 5% CO2. Under this condition, after 36 to 48 h, approximately half of the cells adhered to the culture flask with an extension of pseudopods, the remaining cell suspensions were removed along with the media and fresh media was added to maintain and develop the adherent cell culture till it becomes 80% confluent. The methanol extract was added in different concentration (ranging from 40, 60, 80, 100 and 120 μg) and incubated overnight. A wound was made by scratching on the monolayer of cells using a sterile pipette tip. The closure of wound was monitored and photographed. The distance covered by the cells in the wounded area was measured and tabulated [18].

To determine whether the antitumor activity of methanol extract is through apoptotic cell death, the nuclei of the extract treated MEG-01 cells were stained with EtBr (Ethedium Bromide), Acridine orange and Giemsa staining solutions and the apoptosis morphological features were observed. The MEG-01 cells were harvested after the treatment with methanol extract, washed in ice-cold PBS and then fixed by incubating with 3.7% paraformaldehyde in PBS for 10 min at room temperature. The fixed cells are washed in PBS and stained in DAPI solution for 10 min at room temperature followed by the PBS wash again. The cells were then analysed in fluorescence microscopy. Same procedure was followed with untreated cells and the comparative study was done [19].

Apoptosis activity was further confirmed with DNA fragmentation assay [15], in which the treated and untreated MEG-01 cells were harvested and lysed by incubation with a lysis buffer (10 mM Tris-HCl of pH 7.4, 150 mM NaCl, 5 mM EDTA and 0.5% triton X-100) for 1 hr at room temperature. The lysates were vortexed and centrifuged for 30 min at 4°C. The DNA was then precipitated and extracted from the supernatant using neutral phenol: chloroform: isoamyl alcohol mixture. The extracted samples were analysed electrophoretically on 2% agarose gel containing 0.1 μg/ml of EtBr. 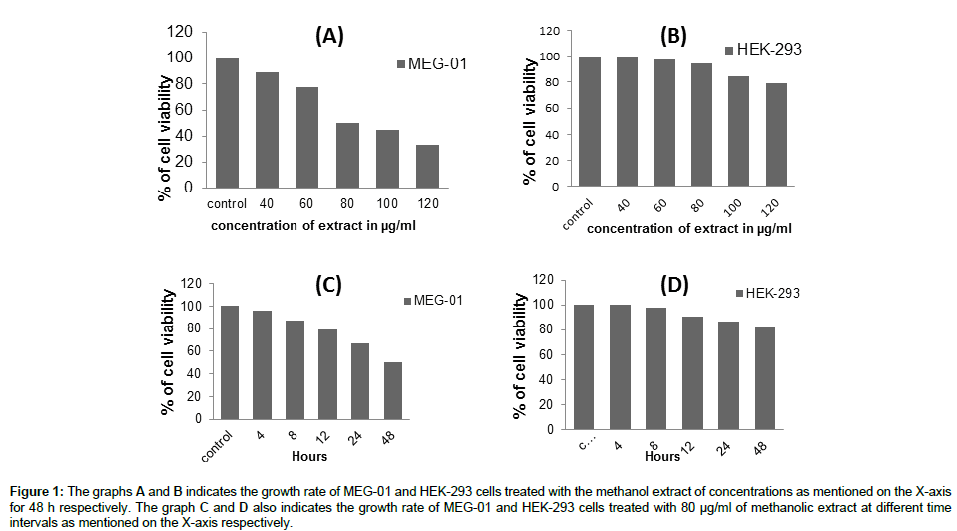 The adherent cell cultures of MEG-01 were utilized in the experiment that produced statistically significant result. The untreated MEG-01 cells were taken as control. The wound healing assay gives the clear picture of the ability of methanolic extract to inhibit the cell proliferation in MEG-01 cells. Increasing in the concentration of methanolic extract on the MEG-01 cell monolayer containing the scratch, lead to less closure of the wound (Figure 3). The graph (Figure 4) correlating the healing of wounded area in percentage with respect to the different concentration of the extract indicates the prominent anti-proliferative activity of the methanolic extract of Wedelia trilobata since wound healing depends upon the proliferation rate of MEG-01 cells.

Figure 3: Photograph indicates the closure of the wound (scratch on the MEG-01 cell monolayer) with respect to the different concentrations of methanolic extract treated. 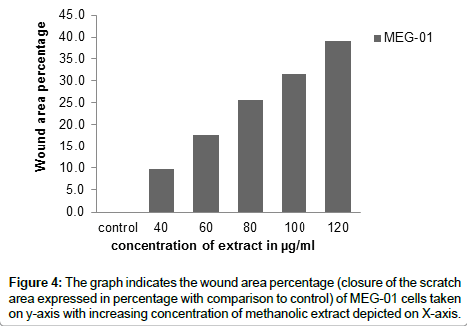 Figure 4: The graph indicates the wound area percentage (closure of the scratch area expressed in percentage with comparison to control) of MEG-01 cells taken on y-axis with increasing concentration of methanolic extract depicted on X-axis.

The apoptotic activity of the extracts by the nuclear staining assay clarified the major role in decrease in the proliferation rate of MEG-01 cells. The efficient apoptotic activity of methanol extracts of Wedelia trilobata was enlightened through nuclear staining assay (Figure 5) and it is another significant property along with the anti-proliferative effect. The MEG-01 cells upon treating with the methanolic extracts showed nuclei degradation and cellular destruction; with increase in production of apoptotic bodies respectively. The activity was enhanced by increasing concentrations of methanolic extract. Figure 5: Photographs showing morphological changes in the nuclei of treated MEG-01 cells. MEG-01 cells treated with different concentrations of methanolic extract were processed for nuclear staining using (A) EtBr-Acridine orange and (B) Gimsa staining solutions where untreated MEG-01 cells were taken as control.

Figure 6: Fragmentation of DNA upon induction of apoptosis by methanol extract of Wedelia trilobata: In the gel picture first line indicates the control represented as C, contains the DNA of untreated MEG-01cells followed by the lines containing fragmented DNAs of MEG-01 cells treated with increasing concentrations of methanolic extract.

The findings in this study has given the strong basic foundation for further purification, structural analysis of the fractions of methanolic extracts with significant anti-leukaemia activity on MEG-01 cells and implication of combining therapy against Leukaemia models. The study has provided the rational base for the folkloric use of methanolic extracts of Wedelia trilobata as a significant anti-proliferating agent of MEG-01 cells. The inhibition of the cell progression is by induction of apoptosis and it has the neutral effect on the normal cells found through the experimental data obtained using HEK-293 cells.

Authors are grateful to the Head, School of Biotechnology and Genetic Engineering, Bharathiar University, Coimbatore for laboratory facilities. One of the authors, K. Shiva Prasad would like to thank Prof. Mohini Gupta, Director, Manipal Centre for Natural Sciences, Manipal University for computational facilities and moral support.

Copyright: © 2016 Venkatesh U, et al. This is an open-access article distributed under the terms of the Creative Commons Attribution License, which permits unrestricted use, distribution, and reproduction in any medium, provided the original author and source are credited.