Natural products have been a source of medicinal agents since thousands of year and remarkable numbers of modern drugs have been derived from natural sources, predominantly based on their knowledge available in traditional medicine. The modern natural product research is undergoing a revolution due to recent advancements in combinatorial biosynthesis, microbial genomics and screening processes. The total synthesis of complex natural products has long presented a big challenge to the synthetic chemist, and led to considerable advances in synthetic methodology. To continue to be competitive with other drug discovery methods, natural product research needs to continually improve the speed of the screening, isolation, and structure elucidation processes, as well addressing the suitability of screens for natural product extracts and dealing with issues involved with large-scale compound supply.

Natural products have been a source of medicinal agents since thousands of year and remarkable numbers of modern drugs have been derived from natural sources, predominantly based on their knowledge available in traditional medicine. The past century, however, has seen an increasing role played by microorganisms in the production of the antibiotics and other drugs for the treatment of serious diseases, and more recently, marine organisms have proved to be a rich source of novel bioactive agents. Natural products will continue to play a crucial role in meeting this demand through the expanded investigation of the world’s biodiversity, much of which remains unexplored.

It has been projected by the World Health Organization (WHO) that approximately 80% of the world’s population relies mainly on traditional medicines for their primary health care. Plant products also play an imperative role in the health care systems of the remaining 20% of the population, mainly residing in developed countries, and at least 119 chemical substances, derived from 90 plant species, can be considered as important drugs at present in use in one or more countries. Of these 119 drugs, 74% were discovered as a result of chemical studies aimed at the isolation of the active substances from plants used in traditional medicine [1].

Novel natural product derivatives can be optimized on the basis of their biological activities using modern sophisticated biosynthetic, combinatorial and high throughput techniques to yield effective chemotherapeutic and other bioactive agents. The phytochemists have always been impressed by the fact that compounds found in nature exhibit an almost incredible range of diversity in terms of their physicochemical and biological properties. Most of these compounds are secondary metabolites with functions in plants, fungi, and marine organisms that are still not extensively understood. At present, it is assumed that many of these compounds act in defense of the harmful effects of toxins, carcinogens, or mutagens found in the plant or attack by external predators [2-4].

The modern natural product research is undergoing a revolution due to recent advancements in combinatorial biosynthesis, microbial genomics and screening processes. Moreover, access to hyphenated techniques like Liquid Chromatography-Mass Spectrometry, Liquid Chromatography-Nuclear Magnetic Resonance have raised the hope of drastically reducing the time and cost involved in natural product research by using dereplication processes that are combination of techniques to avoid the already reported compounds. The developments of antimalarial and anticancer drugs using some of the lead compounds (Phytoconstituent) isolated from natural source are discussed below.

Quinoline type of alkaloid, quinine, formed the basis for the synthesis of the commonly used antimalarial drugs, chloroquine and mefloquine. Chemically quinine (Figure 1) is (R)-(6- Methoxyquinolin- 4-yl) ((2S,4S,8R)-8-vinylquinuclidin-2-yl)methanol. It was originally isolated in 1820 by French pharmacists Caventou and Pelletier from the bark of Cinchona species (e.g., Cinchona officinalis) which had long been used by native groups in the Amazon region for the treatment of fevers, and was first introduced into Europe in the early 1600s for the treatment of malaria.

With the emergence of resistance to these drugs in many tropical regions, another plant, Artemisia annua (Quinhaosu), long used in the treatment of fevers in traditional Chinese medicine, has yielded the agents artemisinin. Chemically artemisinin (Figure 2) [(3R,5aS,6R,8aS,9R,12S,12aR)-octahydro-3,6,9-trimethyl-3,12-epoxy-12H-pyrano[4,3-j]-1,2- benzodioxepin-10(3H)-one]. Artemisinin and its derivatives, artemether and arteether, are exclusively important antimalarial agents valuable for treating otherwise resistant parasites [5,6].

They act more rapidly and over a wider range of parasite developmental stages than other antimalarials [7]. In recent times, a study has shown that artesunate reduces mortality compared with quinine in the treatment of severe Plasmodium falciparum malaria [8], even though this study has raised some interesting issues [9,10]. Like quinine, artemisinin is also derived from a plant but is structurally a most dissimilar compound. The pharmacophore consists of a peroxide within a 1, 2, 4-trioxane configuration, the presence of which has led to several suggestions of how these antimalarials might work [11]. Many of these suggestions have been based on the understanding of classic peroxide chemistry, and much of the experimental evidence that has been accumulated is based on the chemical behavior of artemisinins [12,13]. However, the application of medicinal chemistry principles rather than any prior consideration on how the peroxide exerts its antimalarial activity has led to improved forms of artemisinins (both in terms of potency and toxicity) and to the successful synthesis of artemisone [14-17], which is one of the most potent semi-synthetic derivates that is undergoing clinical studies. Experimental chemistry has also generated fully synthetic trioxolanes, which are currently being developed for clinical use [18]. None of these approaches has required knowledge of the mechanisms of action of these drugs. Poor bioavailability of artemisinin limits its effectiveness and hence semisynthetic derivatives of artemisinin have been developed. These include:

• Artesunate (water-soluble: for oral, rectal, intramuscular, or intravenous use)

• Artemether (lipid-soluble: for oral, rectal or intramuscular use)

Camptothecin [(S)-4-ethyl-4-hydroxy-1H-pyrano [3',4':6,7] indolizino [1,2-b]quinoline-3,14- (4H,12H)-dione] is secondary metabolites isolated from the wood bark of Camptotheca acuminata. This drug is native of China. Taxol is chemically (2α,4α,5β,7β,10β,13α)-4,10- bis(acetyloxy)-13-{[(2R,3S)-3-(benzoylamino)-2-hydroxy-3- phenylpropanoyl]oxy}-1,7- dihydroxy-9-oxo-5,20-epoxytax-11-en- 2-yl benzoate. This drug was obtained from the bark of plant species, Taxus brevifolia (Pacific Yew), found in the northwest Pacific coastal region of the United States. The compounds were isolated guided by bioassay on various extracts and chromatographic fractions. Their unique and hitherto known structures (Figures 3 and 4) were elucidated by nuclear magnetic resonance, mass spectrometry, and X-ray analysis. 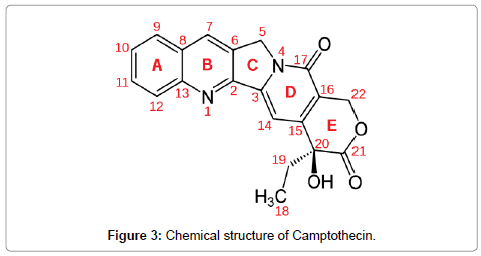 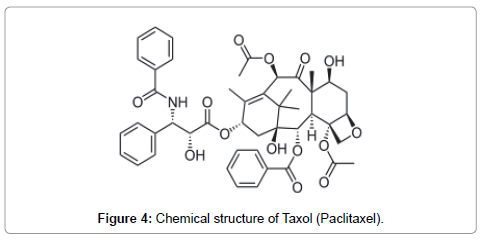 Both compounds have exceptional mechanisms of antitumor activity; camptothecin uniquely inhibits an enzyme, topoisomerase I, involved in DNA replication. Taxol binds to a protein, tubulin, thus inhibiting cell division. Taxol has been called the best new anticancer agent developed from natural products, showing particular efficacy against ovarian cancer. Camptothecin and analogues singly or combined with cisplatin show efficacy against solid tumors, breast, lung, and colorectal, which hitherto have been unaffected by most cancer chemotherapeutic agents [19].

The list of some plant derived drugs which can be served as a lead for the synthesis of new drugs is summarized in Table 1.

The total synthesis of complex natural products has long presented a big challenge to the synthetic chemist, and has led to considerable advances in synthetic methodology [20]. Enroute to the total synthesis of the natural product, it may be possible to identify a simpler precursor or analog containing the essential features of the molecule necessary for activity (the pharmacophore), and having similar or better activity. An important example is the synthesis of the marine-derived antitumor agent, halichondrin B, which allowed the synthesis of a huge number of variants, mainly smaller molecules that maintained the biological activity, but were intrinsically more chemically stable, due to the substitution of a ketone for the ester linkage in the macrolide ring [21]. The advent of routine High Throughput Screening (HTS) has been one of the most important change to the drug discovery pre-process [22-24]. Screening of one hundred thousand samples in a routine assay can now be completed in just over a week using 384-well formatting, a data handling system, and limited robotics. This screening time can be decreased further using higher density formats and advanced robotics [25,26]. Therefore, the number of compounds or extracts that can be screened for each drug target is generally not the rate-limiting step. More important considerations are the cost of the screen consumables, time required, and the people resources allocated to each screen. The cost of a screen can escalate quickly if an expensive screen format has to be used or the substrate or reagents are difficult to make, have a short half-life, and/or are expensive to purchase.

There is no doubt that plants are among the most perfect “natural laboratories” for the synthesis of various molecules ranging from simple skeleton to highly complex chemical structures. To continue to be competitive with other drug discovery methods, natural product research needs to continually improve the speed of the screening, isolation, and structure elucidation processes, as well addressing the suitability of screens for natural product extracts and dealing with issues involved with large-scale compound supply. Nature continues to be a main source of molecular diversity, which, through the pursuit of multidisciplinary, international, collaborative research, can result in the discovery of promising lead compounds, some of which may be developed into commercial drugs. The continuing threat to biodiversity through the destruction of terrestrial and marine ecosystems, however, lends urgency to the need to expand the collaborative exploration of these resources as a source of novel bioactive agents.

Copyright: © 2014 Pawar HA. This is an open-access article distributed under the terms of the Creative Commons Attribution License, which permits unrestricted use, distribution, and reproduction in any medium, provided the original author and source are credited.