Photophysics of Przewalskinone-B and its Binding Behavior with β-Cyclodextrin

For thousands of years, herbal medicine holds a great promise for medical diagnosis and treatments in Asia and now is considered a complementary or alternative medical system in most Western countries. Different from conventional medicine in which drugs are studied in isolation, herbal medicine typically incorporates several medicinal herbs which contain multiple ingredients that probably produce a more favorable response than an isolated single constituent [1].

Przewalskinone-B is one such drug that is obtained from the plant Salva Perzewalskii, a herbaceous perennial one, native to the Chinese provinces of Gansu, Hubei, Sichuan, Xizang, and Yunnan, typically growing along stream banks, forest edges, among shrubs, and on granitic hillsides. It is an anthranoid form of the extract obtained from the stem bark of the genus Ochna Obtusata [2]. It is well established as a medicinal drug [3,4] and is also widely acknowledged for its antiinflammatory properties [2].

The oral route of drug administration is the most convenient way of choice for the formulators and continues to dominate the area of Pharmaceutics. However, though popular, this route is limited by absorption and bioavailability in the milieu of gastrointestinal tract. Hence bioavailability is undoubtedly one of the most important pharmacokinetic parameters since it is the indicator of the efficiency of the drug delivery to the systemic circulation [1]. In spite of its availability in comfortable yields and well established medicinal properties, przewalskinone-b has got limited applications due to its poor solubility in water [5]. This directly confines its bioavailability to living species when used as a drug. Here, in our discussion we look in the direction of the enhancement of bioavailability of this drug by complexing it with a very popular drug carrier namely β-Cyclodextrin. An effective binding between the host (β-CD) and the guest (Przewalskinone) is anticipated which would eventually increase the bioavailability of the target drug namely Przewalskinone-B.

The structure of the medicinal drug [7], Przewalskinone-B is as shown in Figure 1. 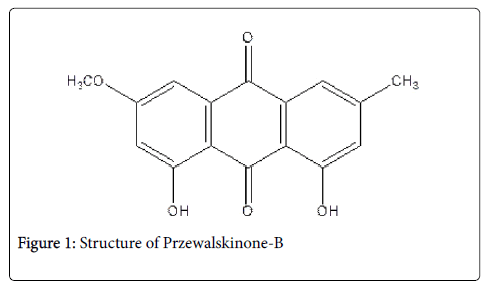 The Excitation spectrum of Przewalskinone-B was recorded with 1 × 10-6 M solution and the observation is as shown in Figure 2. Two peaks were observed at 280 nm and 421 nm which are attributed to n → π* and π → π* transitions happening in the molecule [8]. The absorption spectrum of Prze-B is as depicted in Figure 3 which also picturizes the two transitions at 268 nm and 421 nm. The emission spectrum of the compound for the same concentration when excited at 423 nm showed a characteristic behavior as shown in Figure 4, which had its maximum emission intensity at 514 nm. This shows that there occurs a single emitting species in the excited state of the Przewalskinone-B molecule. 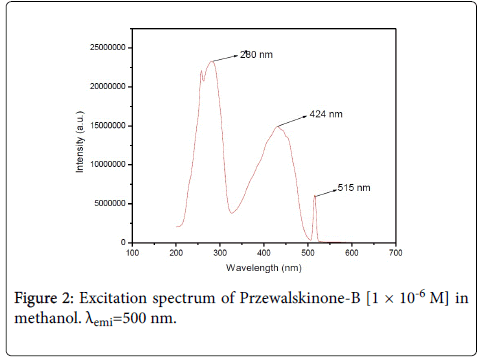 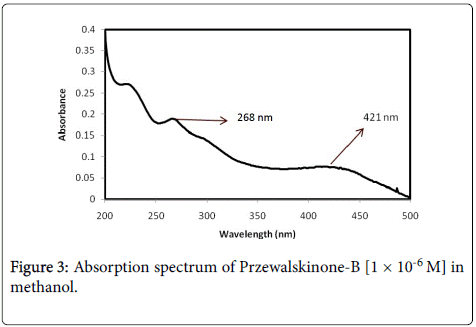 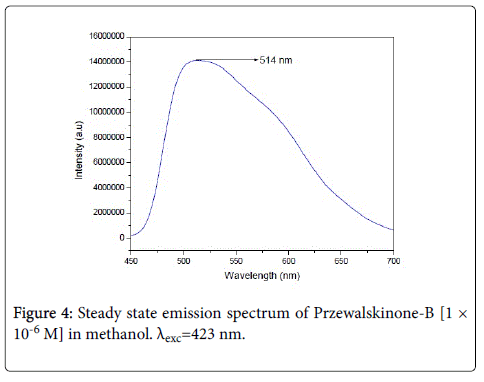 In order to understand the binding capacity of the Przewalskinone- B within the cavities of β-CD, binding studies were carried out by mixing a fixed concentration of Przewalskinone-B (1 × 10-6 M) with several aliquots of β-CD ranging from 5 × 10-5 M, 1 × 10-4 M, 2 × 10-4 M, 4 × 10-4 M and 8 × 10-4 M. he corresponding absorption and emission spectra of Przewalskinone-B/β-CD host-guest system is as shown in Figures 5 and 6 respectively. As it is incidental from the absorption spectrum (Figure 5), there is a red shift observed with respect to absorbance maximum from 421 nm to 433 nm (12 nm) which could be attributed to the inclusion of the guest molecule into the more polar hydrophobic cavity of the β-CD. Indeed, this also leads to the stability of the molecule in the excited state due to the intermolecular hydrogen bonding of the host-guest species. 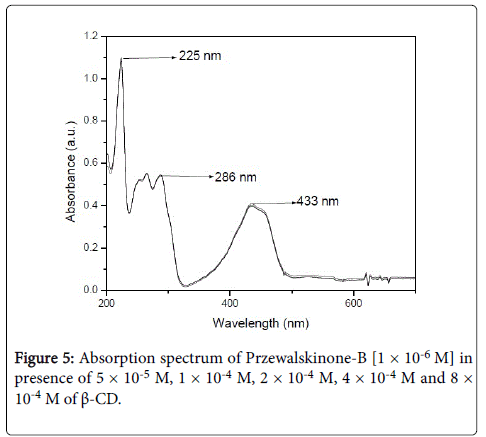 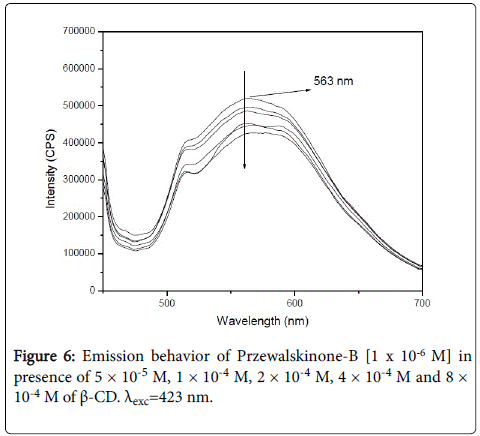 The steady state emission spectrum (Figure 6) supports the above said observations as there was also a red shift observed in the spectrum to the tune of around 50 nm and there was also a decrease in intensity of emission with increase in concentration of β-CD. Such solvatochromic shifts in inclusion complexes of cyclodextrin complexes due to the presence of a hydrophobic interior cavity have been already reported [9]. This further evidence the stability of the host-guest species due to complexion [10]. The phenomenon is pictorially represented as in Figure 7. 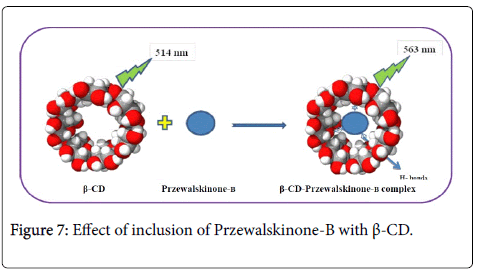 Figure 7: Effect of inclusion of Przewalskinone-B with β-CD.

Since the change in emission intensity is anticipated due to the formation of a complex between β-CD and Przewalskinone-B, it is possible to use a Benesi-Hildebrand to find out the association constants of the complexes. The derivation of this method as it is applied to CD complexes is already reported elsewhere [11]. Accordingly, from the emission spectrum, a Benesi-Hildebrand plot was constructed (Figure 8) and the binding constant was determined for the host guest complex as 2 × 107 M-1. The stoichiometry of complexation is assigned as a 1:1 complex from the nature of the plot as inferred from Figure 6. The high factor of association constant obtained is in good correlation with the stability of the host-guest of β- CD-Przewalskinone-B proposed [12]. 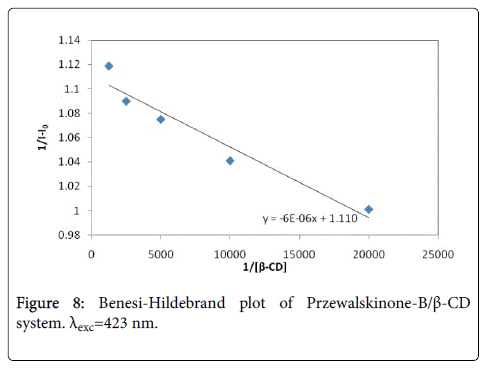 Photophysical behavior of Przewalskinone-B was recorded in an alcoholic medium. As a characteristic absorption and emission spectrum was observed, binding behavior of the molecule was analysed with a well-known host viz., β-CD. As expected, the hostguest complex was eventually formed and was also found to be highly stable when compared to the free entity of Przewalskinone-B as evidenced from the red shifts observed in both absorption and emission studies of the complex. This was further supported by the high association constant obtained from Benesi-Hildebrand plot. Hence a brand-new host-guest complex of β-CD-Przewalskinone-B is hereby proposed and studied effectively.

The author would like to thank Dr. P. Ramamurthy, Director, National Centre for Ultrafast Processes for kindly providing the instrumentation facilities. Thanks, are also owed to Dr. E. Sukumar, Department of Research and Development, Saveetha University for providing the sample.

Copyright: © 2017 Krishnaveni R. This is an open-access article distributed under the terms of the Creative Commons Attribution License, which permits unrestricted use, distribution, and reproduction in any medium, provided the original author and source are credited. 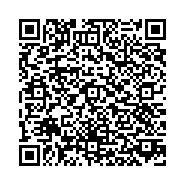