The present study was designed for phytochemical and antioxidant activity of methanolic extract of the whole plant Euphorbia thymifolia linn. Belonging to the family Euphorbiaceae. It cures many diseases. The phytochemicals present in this methanolic extract were studied by standard Protocols and the invitro antioxidant activities were studied using different methods i.e., H2O2 scavenging activity, Reducing power method and Phosphomolybdinum method. These three methods show significant activity with standard drugs.

The Whole parts of Euphorbia thymifolia linn. was collected from local areas of Anantapur and was identified and authenticated by Dr. Reddy Raju Venkatapathi Raju, Botanist, SK University, Anantapur, Andhra Pradesh, India. A voucher specimen has been preserved in our laboratory for future reference. The Whole plant was shade dried under reduced pressure, powdered by a mechanical grinder and were passed through 40-mesh sieve and stored in airtight container for further use.

About 1 kg of the powdered plant material was exhaustively extracted using Methanol solvent in a Soxhlet extractor. The extract was concentrated and dried by using Rotavapour (Heidolph) under vacuum. The yield of the concentrated Methanolic extract was 11.8%.

The crude drug was dissolved in distilled water and subjected to preliminary phytochemical screening. The study was carried out by using standard procedure described by Kokate [2] and Harborne [3].

A solution of H2O2 (20 mm) was prepared in phosphate buffer saline (PBS, pH 7.4). Various concentration (10 μg-100 μg) of standard and extracts was prepared, 1 ml of the extract and standard was dissolved in methanol in a separate volumetric flask and to this solution 2 ml of H2O2 solution in PBS was added, the absorbance was measured at 230 nm, after 10 min against blank solution. The % inhibition of OD was calculated by the formula.

Method based on the principle of increase in the absorbance of the reaction mixture. Increase in the absorbance indicates increase in antioxidant activity [4]. Different concentration of extracts (20 μg-100 μg) in 1 ml of distilled water were mixed with 2.5 ml of phosphate buffer (0.2 m; pH 6.6) and 2.5 ml of potassium ferricyanide [K3Fe(CN)6] (1%), the resulting mixture was incubated at 50°C for half an hour. Then, 2.5 ml of trichloroacetic acid (10%) was added to the mixture, which was then centrifuged at 3000 rpm for 10 min. Finally, 2.5 ml of upper layer solution was mixed with 2.5 ml of distilled water and 0.5 ml of FeCl3 (0.1%) were added. The absorbance was measured at 700 nm in UV-Vis spectrophotometer against blank. Increasing of the reaction mixture indicates increasing reducing power [5]. The % inhibition of OD was calculated by the formula.

In this method quantitative determination of anti-oxidant capacity, through the formation of phosphomolybdenum complex. The assay is based on the reduction of Mo (VI) to Mo (V) by the sample analyte and subsequent formation of a green phosphate Mo (V) complex at acidic pH. An aliquot of 0.3 ml of sample solution containing a reducing species in DMSO was combined in a test tube with 3 ml of reagent solution (0.6 m H2SO4, 28 mm sodium phosphate and 4 mm ammonium molybdate) then the tubes were covered with aluminium foil and kept in a water bath at 95°C for 90 min. Then the samples were cooled to room temperature, absorbance of each solution was measured at 695 nm against blank. The total anti-oxidant was expressed as mm equivalent to DMSO [6]. The % inhibition of OD was calculated by the formula. The results are tabulated in Tables 1-4 and (Figures 1-3) respectively. 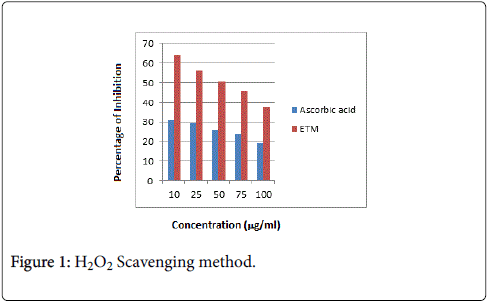 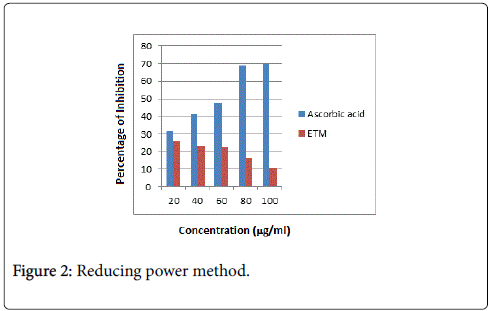 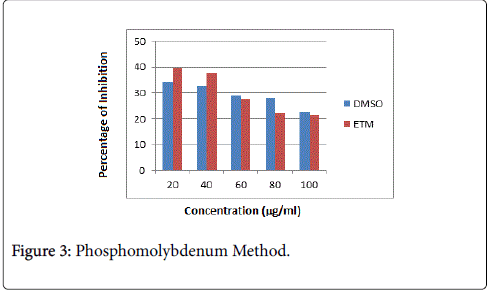 Copyright: © 2017 Reddy KG. This is an open-access article distributed under the terms of the Creative Commons Attribution License, which permits unrestricted use, distribution, and reproduction in any medium, provided the original author and source are credited.