In the present study, different solvent extracts of “Pentas lanceolata” leaves (family Rubiaceae) were under taken for phytochemical investigation and subjected to analgesic activity. The preliminary and phytochemical investigation showed presence of sterols, triterpinoids, glycosides, flavonoids, alkaloids, carbohydrates, resins. The different solvent like n-Hexane, ethyl acetate, ethanolic extracts of compounds from “Pentas lanceolata” leaves. Analgesic activity was performed by the acetic acid induced writhing method. Due to the presence of the above compounds in n-hexane and ethanol extracts showed significant activity (P<0.01) when compared with the standard (aspirin) whereas ethyl acetate extract showed moderate to weak (P<0.05) activity.

Pentas lanceolata, commonly known as Egyptian Star cluster, is a species of flowering plant in the madder family, Rubiaceae that is native to much of Africa as well as Yemen. It is known for its wide use as a garden plant where it often accompanies butterfly gardens. These leaves are collected from Osmania university and authenticated (voucher no: 0166) by Prof. Prathibha Devi, Dept of botany, Osmania university, Hyderabad, Telangana, India. • It is used to anti-bacterial; anti-fungal activity had been reported and also used in beds and borders of garden, containers, and houseplant. Also may be effectively gown indoors under artificial lights [1].

The leaves of Pentas lanceolata were subjected to fine powder and 5.0 Kg were subjected to continuous successive extraction with different solvents like n-hexane, ethyl acetate and ethanol (70%) in to 15 batches of each 250 g to 280 g in soxhlet extractor. After complete extraction, the different (n-Hexane, ethyl acetate and ethanol) solvents were concentrated to water bath and finally dried under reduced pressure to the dryness in flash evaporator. After drying the respective extracts were weighed and calculated percentage yield (Tables 1 and 2).

Table 2: The analysis of extracts of the Pentas lanceolata leaves.

Pain is an unpleasant feeling often caused by intense or damaging stimuli, such as stubbing a toe, burning a finger, putting alcohol on a cut, and bumping the “funny bone”. The International Association for the Study of Pain’s widely used definition states: “Pain is an unpleasant sensory and emotional experience associated with actual or potential tissue damage, or described in terms of such damage [2].

Pain motivates the individual to withdraw from damaging situations, to protect a damaged body part while it heals, and to avoid similar experiences in the future. Most pain resolves promptly once the painful stimulus is removed and the body has healed, but sometimes pain persists despite removal of the stimulus and apparent healing of the body; and sometimes pain arises in the absence of any detectable stimulus, damage or disease. Here, the chemical induced writhing tests are used for the evaluation of the analgesic activity of peripherally acting drugs [3].

Writhing test is a chemical method used to induce pain of peripheral origin by injection of irritant principles like phenylquinone, acetic acid in mice [4]. The animals react with characteristic stretching behavior, which is called writhing. In this method male albino mice weighing between 25-30 g body weights were selected for the study. The animals were divided into 5 groups of 6 animals each. First group of animal received acetic acid 0.6 % v/v. i.p. and served as control. Second group served as positive control and received aspirin 150 mg/kg body weight. The third, fourth and fifth groups of animals received 200 mg/kg body weight of extracts of the Pentas lanceolata leaves extracts as a suspension in 0.6% w/v sodium CMC 30 minutes prior to the administration of acetic acid injection. The writhing effect was indicated by the stretching of abdomen with simultaneous stretching of at least one hind limb. This was observed for 30 minutes and the percentage inhibition was calculated by using the formula [5-8] (Table 3).

The results were carried out to calculate Mean ± SEM for determination of significant inter groups difference which was analyzed separately and one way analysis of variance, (ANOVA) [9] was carried out followed by Dunnet’s ‘t’ for individual comparison [10].

The shade dried leaves of Pentas lanceolata was subjected to successive solvent extraction method by using n-hexane, ethyl acetate and ethanol (70%) in soxhlet extraction. All these extracts were concentrated and calculated for their percentage yield. The yields were found to be 15 g, 12 g, and 14 g respectively.

Statistical analysis was done by ANOVA followed by Dunnet’s test. All the values are expressed as mean ± SEM.*P < 0.05, **P < 0.01. When compared to control 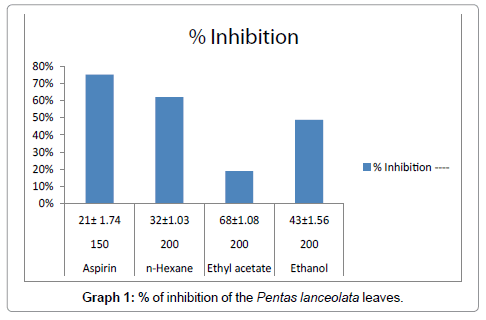 Graph 1: % of inhibition of the Pentas lanceolata leaves.

No death was observed even at the maximum administered dose 2000 mg/kg body weight [11]. However there was a dose dependent increase in the magnitudes of certain autonomic response.

Analgesic activity by using Acetic acid induced writhing method results indicated that the n-hexane, ethanol extracts of leaves of Pentas lanceolata at dose of 200 mg/kg showed significant activity (p<0.01) in reducing the pain and ethyl acetate extract of Pentas lanceolata leaves at dose of 200 mg/kg exhibited a moderate to weak activity (P<0.05), in reducing the pain, which was comparable to Aspirin (150 mg).

Thus the result revealed the analgesic effect of n-hexane, ethyl acetate and ethanol extract of Pentas lanceolata leaves seems to support the use of it as an analgesic.

The shade dried leaves of Pentas lanceolata was subjected to successive solvent extraction method by using n-Hexane, ethyl acetate and ethanol (70%) in soxhlet extraction. Analgesic activity by using Acetic acid induced writhing method results indicated that the n-Hexane, ethanol extracts of leaves of Pentas lanceolata at dose of 200 mg/kg showed significant activity (p<0.01) in reducing the pain and ethyl acetate extract of Pentas lanceolata leaves at dose of 200 mg/kg exhibited a marked (P<0.05), in reducing the pain, which was comparable to standard drug aspirin (150 mg).

Further investigation we will find the structural conformation, structural elucidation of different extracts of Pentas lanceolata.

I am also grateful to express my heartful thanks to my parents, friends and also thanks for their experience advices and constant encouragement.

Copyright: © 2014 Vishwanadham Y, et al. This is an open-access article distributed under the terms of the Creative Commons Attribution License, which permits unrestricted use, distribution, and reproduction in any medium, provided the original author and source are credited.