The present study was aimed to identify phytochemical presence in leaves of Randia spinosa using hexane, chloroform, ethanol, methanol and distilled water for extraction. Among these solvents, methanol have shown important phytochemicals in qualitative method. Further, column chromatography has been carried out for the partial purification of methanol extract by sequential elution with hexane, ethyl acetate and methanol as eluents. The methanol extract of HPTLC study shows the significant phytochemicals. GC-MS result of ethyl acetate extraction of leaves shown the presence of triterpenoid esters, cinnamate, naphthalene, phenolic compounds mainly BHT and methanol fraction has shown the presence of triterpenoid esters, amines and coumarins mainly, 5a-methoxy-9a-methyl-3-(1-propenyl) perhydro-pyrano[4,3-b]benzopyran

Plants are the treasures of phytochemicals are useful to treat most of all the human diseases and ailments with proper guidance. Because of the lack of knowledge in identifying the exact plants and plant parts and their proper applications for particular ailments, the herbal medicines are still not yet fully exploited. Herbal medicines have been used for long years. The World Health Organization (WHO) reveals that, there are around 2,50,000 number of higher plant species on earth and among them around 35,000 to 70,000 species were used at one time or another for their medicinal properties [1].

Investigation of herbal constituents of plants with different analytical measures is important to authenticate the plant and its phytoconstituents in distinguishing from other plant species and phytochemicals. The present research was aimed to identify different phytochemicals using different solvents in preliminary phytochemical and column chromatography, HPTLC and GC-MS studies of Randia spinosa. The present study will help to know the presence of phytochemicals and useful in making data base or they can used for any biological activities.

Collection and processing of plant

On the basis of present literature review with slight experimental modifications, the fresh leaves of Randia spinosa were collected from hill station of Devarayanadurga, Tumkur district, Karnataka, India in the month of June, 2014 and identified based on the characteristics. The plant material was washed with distilled water, shade-air dried (26 ± 2°C) and pulverized to a coarse powder in a mechanical grinder, passed through a 40 mesh sieve and stored in air tight container for further work.

Dried leaves of Randia spinosa extraction was done with different solvents, n-hexane, chloroform, ethanol, methanol and distilled water individually by increase in their polarity. The solvent extracts were dried and preliminary phytochemical analysis was carried in selection of suitable solvent for extraction.

Based on the significant results of preliminary phytochemical analysis, only methanol extracts concentrated for further studies. Crude leaf extraction of Randia spinosa was carried out by the sequential extraction at different temperatures using methanol as a solvent. First extraction was carried out with 10 g of dried leaf powder in 50 ml of methanol was extracted at 50°C for 2 h. Second extraction was done by using residue for first extraction with the addition of 50 ml of methanol and extracted for 60 min at 60°C. Third extraction was done using residue for second filtration and with the addition of another 50 ml of methanol to it and heated for 60 min at 70°C. All the extracts at different temperature were mixed. Hexane was added in equal volume, mixed vigourously and hexane layer was separated to remove the trace of plant pigments. The methanol extract was dried and preserved for further experiments.

The partial purification of methanol extract was carried out by the sequential purification through column chromatography. Activated silica gel (pore size 100-200) was used as a stationary phase and n-hexane, ethyl acetate and methanol in sequence were used as a mobile phase. The crude methanol residue partially dissolved in n-hexane and was triturated with silica and further column chromatography was carried out. First n-hexane fraction was collected followed by ethyl acetate fractions and finally the methanol fraction. Further HPTLC was carried out for each fraction to confirm the separation and presence of distinguishable phytochemicals.

Analysis of eluted fractions by HPTLC

High-Performance Thin-Layer Chromatography (HPTLC) is the most advanced form of TLC and comprises the use of chromatographic layers of utmost separation efficiency and the employment of state-ofthe- art instrumentation for all steps in the procedure: precise sample application, standardized reproducible chromatogram development and software controlled evaluation. HPTLC is an entire concept that includes a widely standardized methodology based on scientific facts as well as the use of validated methods for qualitative and quantitative analysis. HPTLC was carried out with different injection volumes in duplicates.

Sample preparation: Eluted fractions were dried at 60°C in water bath to get residue and residue was dissolved in methanol used for HPTLC.

Interpretation of GC-MS mass-spectra were carried out using the database of National Institute Standard and Technology- 2008 (NIST-2008) having more than 62,000 patterns. The spectrums of the unknown components were compared with the spectrum of known components of NIST library and the parameters viz., molecular weight, structure of the components, total ionic chromatograms and ionization chromatograms were ascertained in naming of each compound.

Among n-hexane, chloroform, ethanol, methanol and distilled water leaf extracts of Randia spinosa, methanol was considered as the effective solvent in exhibiting important phytochemicals and was concentrated further studies in detail. Methanol extract has given good results in yield and number of different phytoconstituents compared to other solvent extracts. Phenolic compounds, flavonoids, alkaloids, tannins, cardiac glycosides and phytosterols were observed in significant quality in methanol extracts (Table 1).

Partially purified column fractions of methanol extract further screened to identify different phytochemicals with different aliquots. The HPTLC studies have shown significant results. The methanol and ethyl acetate fractions have shown different phytoconstituents compared to n-hexane fraction. The duplicates of different concentrations of each fraction spotted were visualized under UV- 366 nm. The results confirm that, there was a single major band in n-hexane fraction. Whereas, methanol and ethyl acetate were efficient in extracting different phytoconstituents and it has been confirmed by HPTLC bands (Figures 1 and 2; Tables 2 and 3). Figure 2: HPTLC-spectra/chromatograms of column fractions, A) Hexane, B) Ethyl acetate and C) Methanol fraction of leaves of Randia species at UV-366 nm. 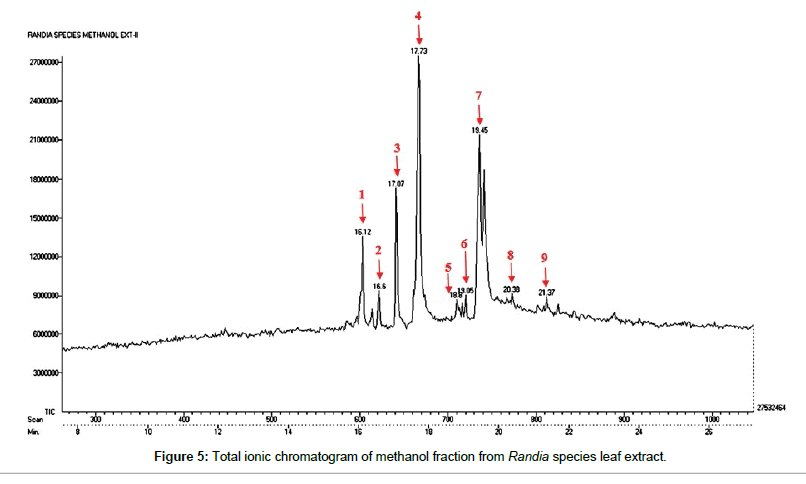 Phytochemical investigations of Randia spinosa have given significant results in all tested analytical procedures. The plants of Randia species are well known in having the presence of terpenoid and phenolic compounds. GC-MS study reveals the presence of terpenoid esters, phenolic compounds and naphthalene derivatives. These studies have been confirmed by the earlier studies carried out in different Randia species [3,4,9].

We found the presence of an effective antioxidant, Butylated Hydroxy Toulene (BHT) in the leaf methanol extract and same BHT have reported in green algae Botryococcus braunii and in cyanobacteria like Cylindrospermopsis raciborskii, Microcystis aeruginosa and Oscillatoria with GC-MS studies [13]. BHT have anticancer activity in human promeylocytic leukemia cell lines (HL-60) and human squamous cell carcinoma cell lines (HSC-2) [14]. So, our BHT can work as antoproperty also. Phenols and flavonoids have noticed the extract and similar results was bserved in Olea europaea and have been characterized by HPTLC. Hence, our results to these findings. These phenol and flavonoids have used to treat different cancers such as breast, colon, hepatocellular and cervical carcinoma cells [15]. Possibly our extract can also use for isolation, characterization and used for treatment of cancer. Many plant phenolic compounds showed the properties of antioxidant and anticancer activities [16]. Hence, our methanol extract of Randia spinosa yielded very important phytochemicals such BHT, phenols, flavonoids, alkaloids and tannins. Further research is needed to identify potent antioxidant and anticancer gents from the extract after purification in in vitro and in vivo.

Among five different solvent, the methanol leaf extract of Randia spinosa have shown important phytochemicals identified from analytical, column chromatography, HPTLC and GC-MS followed by ethyl acetate. The ethyl acetate extraction yielded 12 different phytochemicals whereas the methanol extract exhibited nine phytochemicals. The methanol extract yielded BHT, phenol, flavonoids at high amount and which have already role of antioxidant and anticancer role. The phytosterols, alkaloids and tannins were also found to presence in the extract at less amount. Future studies need to isolate and characterize individual phytochemicals and test for their biological activities such as antioxidant and anticancer.

Copyright: © 2016 Mahabaleshwara K, et al. This is an open-access article distributed under the terms of the Creative Commons Attribution License, which permits unrestricted use, distribution, and reproduction in any medium, provided the original author and source are credited. 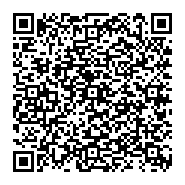