This paper describes a system for the preparation of lappaconitine from Aconitum leucostmum Worosch., using HSCCC, and examines the effect of the two-immiscible solvent system (TISS) composed of chloroform- methanol-0.2 mol/L hydrochloric acid (4:1.5:2). Under the optimized condition, about 75 mg of lappaconitine, at a purity of 98% that was done by high performance liquid chromatography (HPLC), are obtained from 250 mg of the crude alkaloid extract. The compound was checked by HPLC-UV, electrospray ionization mass spectrometry (ESI-MS), 1H NMR and 13C NMR.

Aconitum leucostomum Worosch., which is a kind of perennial plant (Ranunculaceae family), is popular herbs in the northwestern area of China as Xinjiang and Gansu province [1,2]. The Roots of A. leucostomum are externally used as a folk medicine to treat traumatic injury and rheumatic disease [3], and known to contain a large amount of diterpenoid alkaloids, such as N-acetylsepaconitine, anthranoyllycoctonine, N-deacetyllappaconitine, delcosine, delosine, 6, 14-dimethoxyfroesticine, lappaconitine, leucotines, leucotines A, leucotines B, lycaconitine, sepaconitine, etc. [4-6]. The major alkaloid, lappaconitine, was found to exhibit anti-inflammatory, tyrosinase inhibition and analgesic actions, and has been widely used as a pain reliever with neither toxic nor addictive [7-19] (Figure 1). 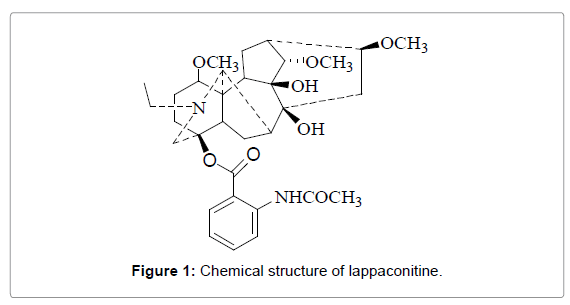 At present, the major diterpenoid alkaloids in A. leucostomum are often separated with conventional isolated techniques as both column chromatography and high- performance liquid chromatography or thin-layer chromatography (TLC), etc., but the methods present a challenge for irreversible adsorption, lower sample recovery and time consuming [4-7]. However, the other separation method like to HSCCC for it, which can be advantages of high efficiency and recovery, are none dealt with [20-22].

For HSCCC, extraction by the counter-current distribution principle is especially suited to the separation of components in a mixture under conditions where the differences in the partition coefficients (K) are small. Thus, it is need to applied, where the method has distinct advantages over comparable multiple chromatographic techniques, to separate an alkaloid from each other. In addition, HSCCC can provide the analysis and separation method for the diterpenoid alkaloids where have a proton affinity and strong ultraviolet-visible absorption. Although the important step for the method is based upon partitioning of desired compounds between two immiscible solvent, it is focused on the stability and solubility, the acceptable ratio, the retention of the stationary phase (Rs) and the suitable K for target component [21,23]. To develop a suitable for diterpenoid alkaloids, pH is adjusting based on neutralization between mobile and stationary phases [24-26].

In this paper, we reported herein the separation and structural elucidation of lappaconitine in crude alkaloid extracts from the roots of A. leucostomum. The optimization of HSCCC separation condition is also discussed.

Whole plants of Aconitum leucostomum Worosch., collected in Burqin of Xinjiang of P.R. China, were identified by Professor Sheng Guan-ming at Xinjiang Institute of Ecology and Geography Chinese Academy of Sciences.

The air-dried, ground roots of A. leucostomum (1.8 kg) were powdered and extracted with 80% ethanol solution (2 × 10 L) under reflux at 80°C for 2 h. Then the extracts were combined and concentrated under reduced pressure at 60°C. The concentrated residue was suspended in water (1:3), and then partitioned with chloroform three times (each times 1 L). The organic layers were combined and concentrated under reduced pressure at 40°C to give a chloroformsoluble residue, and acidified with 5% aqueous H2SO4 solution, after removal of the acid-soluble material, re-basified with Na2CO3 to 7.0 and 10.0, and then successively partitioned with chloroform to obtain 7.89 g (in pH 7.0, C001) and 1.38 g (in pH 10.0, C002) of two chloroformsoluble crud alkaloidal residues. The crude alkaloidal residue (in pH 7.0, C001, 7.89 g) was dissolved in acetone and filtered, and then concentrated to give crude alkaloid 7.38 g.

Selection of the two-phase solvent system

HSCCC separations using of the two immiscible solvents composed of chloroform, methanol and dilute HCl at volume ratios 4:1.5:2 to 4:3:2, and thoroughly equilibrating in a separatory funnel at room temperature. The composition of two-phase solvent system was selected as K values, which were also determined by HPLC, is especially suitable from 0.5 to 2.0 for the desired compounds in crude alkaloid extract. About 0.5 mg of crude example was added to 4.0 mL of an equal volume mixture of the aqueous (upper) phase and the organic (lower) phase, and dissolved. The tube agitated to allow thorough mixing, after equilibrating at room temperature, the upper and lower phase were prepared for HPLC analysis. Then, K value is evaluated by both the peak area of a desired substance in the upper phase (AU) and the lower phase (AL). This is shown as K = AU/AL.

Two immiscible solvents for HSCCC separation was used of a mixture of 4 volumes of chloroform, 1.5 volumes of methanol and 2 volumes of 0.2 mol·L-1 HCl. At each operation, the solvents will be thoroughly mixed, and degassed by sonication for 30 min shortly before use. The sample solution was prepared by dissolving 60 mg of crude sample in 10 mL mixture of 5 volumes of upper phase and 5 volumes of lower phase.

HSCCC separation was carried out preparative using the following procedure. First, for the lower phase (as mobile phase) pumped into the column at a flow-rate of 4.0 mL/min, while the apparatus was run at e revolution speed of 800 r/min. For hydrodynamic equilibrium of two immiscible solvents, as the mobile phase had been eluted from the tail outlet, had been reached (about 1 h later), then sample solution was injected, the peaks of interest were online detected at 254 nm. According to the peak chromatogram, each peak fraction was manually collected and then evaporated under reduced pressure. The residue was dissolved in methanol before proceeding with chromatographic analysis of HPLC.

In this experiment, the crude extract, and the peak fraction from HSCCC separation was analyzed by TLC, with the solvent system composed of chloroform and methanol (5:1), and HPLC. For the sample solution, were dissolved 3.0 mg of the substance to be examined in methanol, sonicate if necessary. These were detected by TLC as blue spot prior to spraying under short-wave UV light using chloroformmethanol (5:1). The analysis was performed on YWC ODS-A column (250 × 4.6 mm, 5.0 μm) at 27°C with flow-rate of 1.0 mL/min. The mobile phase was composed of methanol, water, chloroform, and TEA (70:30:2:0.1). The auto-sampler was conditioned at 4°C and injection volume was 10 μL for sample injection. The peaks of interest were monitored with UV absorbance at 238 nm of wavelengths.

The crude alkaloid extract of the aired, ground roots of A. leucostomum was fractionated by solvent partitions, and was assigned by means of HPLC-UV as described in the experimental section. A combination of CC and semi-preparative HSCCC allowed the isolation of lappaconitine from the CHCl3-soluble fraction.

In separation by HSCCC, A successful, is focused on the selection of a suitable two phase solvent system, as which according to K values (0.5 ~ 2.0) for each desired component. However, separation by HSCCC employing the solvent system of chloroform, methanol, and dilute hydrochloric acid (HCl) systematically selected from 4:3:2 (v/v/v) to 4:1.5:2 (v/v/v) and the concentration of HCl from 0.2 to 0.3 mol·L-1, are investigated and shown in Table 1. The result indicated that the volume of methanol and concentration of HCl on the solvent system for the target compound are most important factor whereas a gradual decrease in the volume ratio of methanol and increase in the concentration of HCl yielded a better resolution in Table 1 and Figure 2. 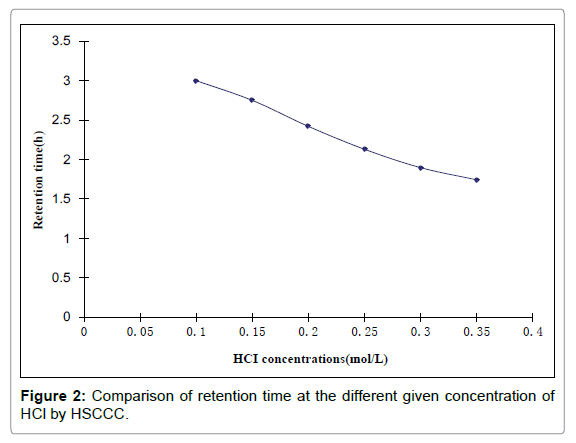 Figure 2: Comparison of retention time at the different given concentration of HCl by HSCCC.

Table 1: The K values and resolution of lappaconitine in several solvent systems for HSCCC. 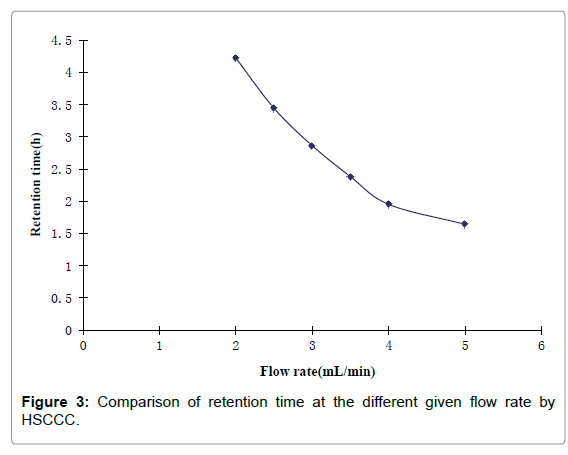 Figure 3: Comparison of retention time at the different given flow rate by HSCCC.

In order to separate the desired compound from the alkaloid extracts from A. leucoetomum by HSCCC, the two-solvent systems composed of chloroform-methanol-0.2 mol/L HCl (4:1.5:2) was chosen first. Using the optimized conditions, about 75 mg of peak 1 fraction are successfully obtained from 250 mg of alkaloid extract from A. leucostomum by preparative HSCCC with a column capacity of 290 mL in less than 3 h, and at a purity of 98% that done by HPLC, as shown in Figures 4, 5 and 6, and Rs was 76%. 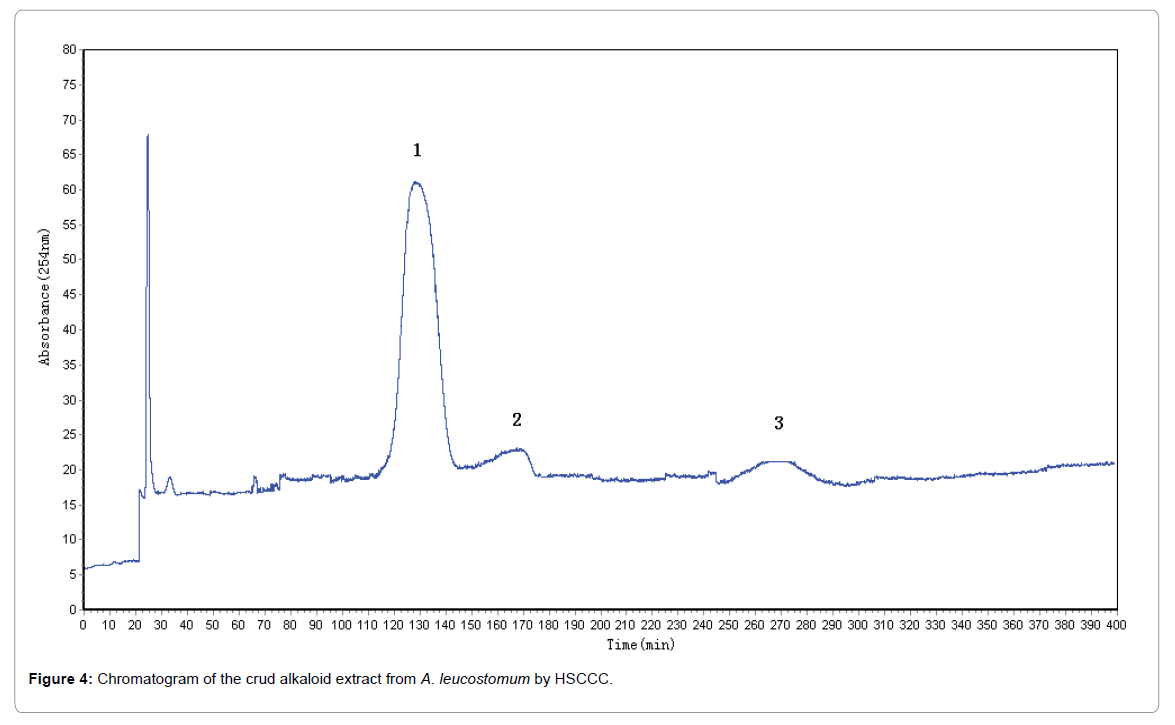 Figure 4: Chromatogram of the crud alkaloid extract from A. leucostomum by HSCCC. 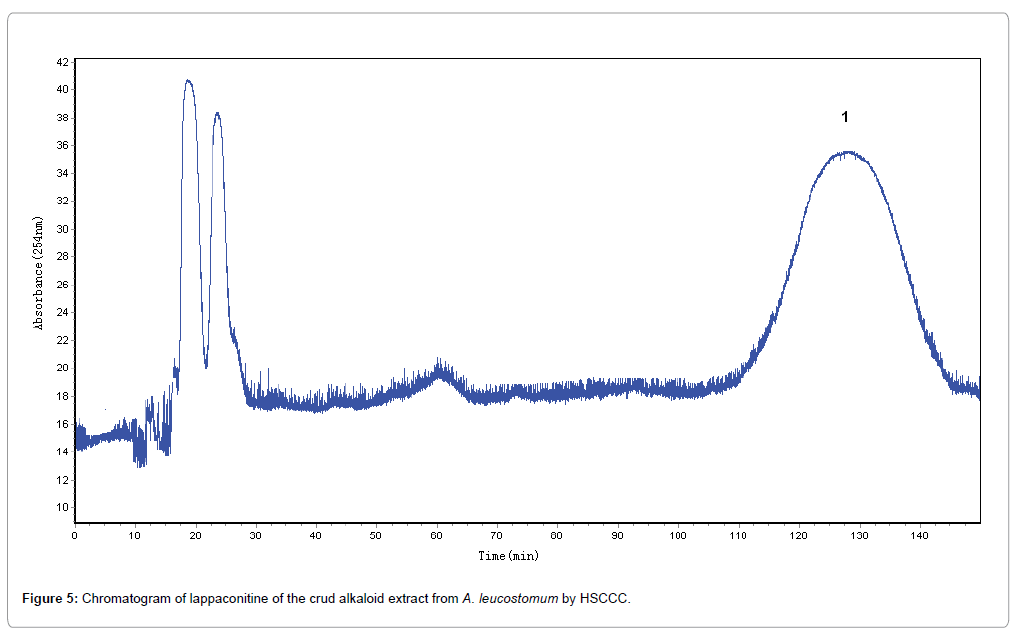 Figure 6: HPLC chromatogram of lappaconitine from the crud alkaloid extract from A. leucostomum.

We isolated from the dry roots of A. leucostomum a known diterpenoid alkaloids, lappaconitine. It was identified by its physicochemical properties (M.P, ESI-MS, 1H NMR, 13C NMR) and chromatographic behaviors (TLC and HPLC).

Only a brief outline of the spectroscopic evidence for the structural assignment of lappaconitine has been published [6,7]. In a previous paper, its structure was assigned on basis of multinuclear (1H, 13C and 15N) high-field NMR and MS results [18,19]. The 1H and 13C NMR spectral date of lappaconitine were in accord with the reported values in the literature [16-19] and further details are provided in the following paragraphs.

The compound was obtained as an amorphous powder, and its molecular ion obtained at m/z 585.2 [M+H] + by ESI-MS. The compound displayed a yellow spot on TLC under UV absorption at 360 nm. Assignments of the 1H- and 13C-NMR spectra of lappaconitine were facilitated by performing 1H-1H COSY and 13C-1H COSY which suggested the presence of three methoxyl (C-1, C-14 and C-16), two acetate groups (NHCOCH3 and OC=O) and a N-ethyl group(NCH2CH3). Thus, comparison of the physical and spectral date obtained for the compound with literature values established the structure of this diterpenoid alkaloid as lappaconitine [3-7,17-19].

A rapid, efficient, and economical HSCCC method for preparative isolation of lappaconitine from A. leucostomum was established. It was identified by its physicochemical properties (MP, ESI-MS, 1H NMR, 13C NMR) and chromatographic behaviors (TLC and HPLC). From the results of the HSCCC and HPLC method, we can conclude that the present method can be satisfactorily used as the reference substances for chromatography or bioactivity compound.

The study was supported by the CAS/SAFEA International Partnership Program for Creative Research Teams and by China National Funds for Distinguished Young Scientists No. 30925045.

Copyright: © 2017 Amatjan A, et al. This is an open-access article distributed under the terms of the Creative Commons Attribution License, which permits unrestricted use, distribution, and reproduction in any medium, provided the original author and source are credited.