In this study, a simple, rapid, accurate, specific, precise and highsensitive RP-HPLC with fluorescence detection (RP-HPLC-FLD) method was developed and validated for simultaneous qualitative and quantitative analysis of 5 compounds (1-5) and combined anthraquinone (calculated as the total amount of emodin and physcion) in RFM sample. Based on chemical quantitative results in 48 RFM samples collected from different locations of Vietnam, multivariate analysis has been applied for classification of samples [5-7].

Forty-eight RFM samples (RFM 1-48) were collected from different parts of Vietnam and were authenticated by Department of Medicinal Material Resources, NIMM (Vietnam).

The chemical structures of analytes are shown in Figure 2. All primary standards were purchased from Sigma-Aldrich. All solvents for HPLC were purchased from Merck. Distilled water was produced by a Milli-Q purification system (Millipore, USA) [8,9]. 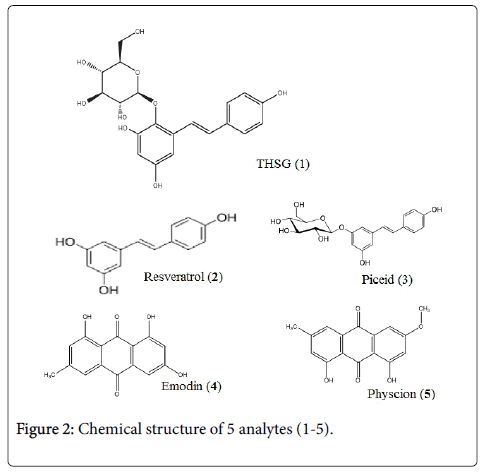 Sample solution A (for quantification of free anthraquinone): weigh accurately 1 g of the powder (through No.4 sieve) to a stoppered conical flask, accurately add 50 mL of methanol and weigh. Heat under reflux for 1 hour, cool and weigh again, replenish the loss of the solvent with methanol and mix well, filter, use the successive filtrate as the test solution A1 (for determination of free anthraquinones, calculated as the total amount of emodin and physcion) (FAQ) [10].

Measure accurately another 25 mL of the successive filtrate to a stoppered conical flask, evaporate to dryness on a water bath, add accurately 20 mL of 8% solution of hydrochloric acid, ultrasonicate (power, 100 W, frequency, 40 kHz) for 5 minutes, add 20 mL of chloroform, heat under reflux for 1 hour and cool immediately, then transfer to a separating funnel, wash the container with a small quantity of chloroform and combine the washings to the same separating funnel, separate the chloroform solution and extract the acidic solution again by shaking with three 15 mL quantities of chloroform, combine the chloroform solutions and evaporate to dryness. Dissolve the residue in methanol and transfer to a 10 mL volumetric flask, dilute with methanol to volume, mix well, filter and use the successive filtrate as the test solution A2 (for determination of total anthraquinones, calculated as the total amount of emodin and physcion) (TAQ) [10].

Sample solution B (for quantification of stilbene): Weigh accurately 0.5 g of the powder to a stoppered conical flask, accurately add 50 mL of ethanol 50% and weigh. Heat under reflux for 1 hour, cool and weigh again, replenish the loss of the solvent with ethanol 50% and mix well, filter, use the successive filtrate as the test solution B.

Condition A (for quantification of anthraquinone): A reverse phase HPLC assay was carried out using an isocratic elution with a flow rate of 1 mL/min, a column temperature of 25°C, a mobile phase of acetonitrile and 0.5% (v/v) formic acid (pH=3) (70/30, v/v). The injection volume was 10 μl of each solution. The fluorescence detector was set at excitation wavelength of 435 nm and emission wavelength of 515 nm [7].

The method detection limit (LOD) and the method quantitation limit (LOQ) were estimated by diluting standard solutions until signalto- noise ratios of 3 and 10, respectively.

Repeatability, accuracy and robustness: Intra- and inter-day variations were chosen to determine the precision of the developed method. For intra-day variability test, the samples were analyzed for six replicates within one day, while for inter-day variability test, the sample were examined in duplicates for consecutive two days. Variations were expressed by the relative standard deviations (RSD) for intra and inter-day.

The accuracy of the method was established by performing recovery experiment by using standard addition method at three different levels.

The robustness of the method is a measure of method’s capacity to remain unaffected by small deliberate variation in method parameters during normal usage. The flow rate was set up at 1.1 mL/min (condition A) and 0.6 mL/min (condition B). From the observations, it was concluded that the method was robust as the deliberate changes made in the method did not affect the results.

Multivariate data analysis: Clustering analysis (CA) and principal component analysis (PCA) were performed by Minitab 14 for windows, which comprise a number of “procedures”-graphical, statistical, reporting, processing and tabulating procedures-that enable simple and rapid data evaluation. A method named as within groups linkage was applied, and Pearson correlation which is a pattern similarity measure, was selected as measurement for clustering analysis.

Different mobile phases were tested for separation of 5 analytes from other components of RFM.

To separate of emodin and physcion: a good separation was achieved by using acetonitrile and 0.5% (v/v) formic acid (pH=3) (70/30, v/v). The flow rate was 1 mL/min and the fluorescence detection had an excitation wavelength of 435 nm and emission wavelength of 515 nm (Figure 3). 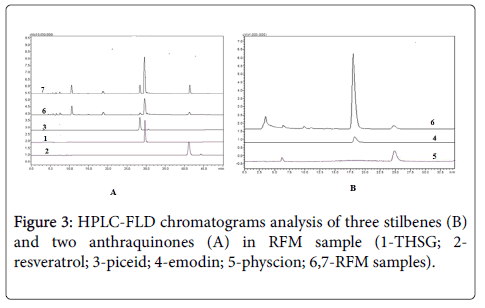 The linearity, regression, and linear ranges of 5 analytes were determined using the developed HPLC-FLD method. The data indicated a good relationship between the investigated compounds concentrations and their peak areas within the concentration ranges of analytes (R2>0.999) (Table 1).

The overall intra- and inter-day variations (RSD) of 5 analytes were less than 4.0%, respectively (Table 1).

As the flow rate changed, the resolutions, tailing factors and theoretical plates did not change much. The modifications did not affect the system suitability criteria. However, the slight variation in the retention time was observed, but did not affect the results.

The results showed that the developed HPLC method was sensitive, precise and accurate for quantitative determination of 5 investigated compounds in RFM sample.

Quantification of 5 compounds in RFM samples

The proposed method was applied to quantitatively analyze THSG, resveratrol, piceid, emodin, physcion and combined anthraquinone (calculated as the total amount of emodin and physcion) in RFM samples. The contents of 5 investigated compounds (1-5) and combined anthraquinone in 48 RFM samples were summarized in Table 2. The results showed that their contents in the samples from different locations were greatly variable.

THSG presented in all tested samples with varying contents ranging from 1% to 4%. However, the contents of THSG in the samples from Ha Giang were above 3% level-these were much higher than other samples.

The contents of four components (2-5) and combined anthraquinone varies considerably in different samples. To determine if these components were specific to the small sample group in the large sample group, Principal components analysis (PCA) and Clustering analysis (CA) were applied to classify and analyze the major components for these samples.

Principal component analysis (PCA): The analysis of chemical data by the technique of PCA permitted to group chemically the samples in four groups, in a way to express and demonstrate their similarities and differences. It was observed with the first main component (PC1), the second main one (PC2) and the third main one (PC3), it was possible to describe 93.3% of the data, being 56.3% of the total variance described by PC1 and 80.1% of the total variance describe by PC1 and PC2 (Figure 4) [8].

In the Figure 5, the biplot graphic PC1 × PC2 of the scores was presented, relating the data of chemical constituents of 48 samples of RFM, in order to correlate them, grouping them in 4 groups (I, II, III, IV). 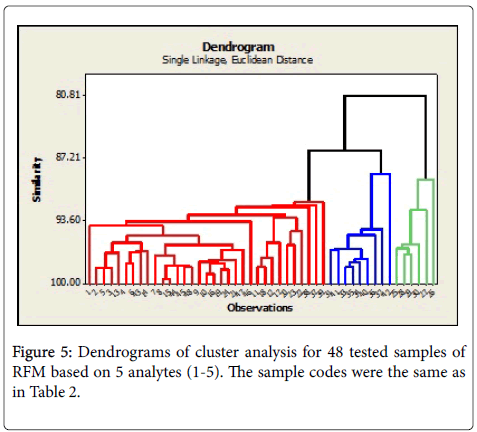 Figure 5: Dendrograms of cluster analysis for 48 tested samples of RFM based on 5 analytes (1-5). The sample codes were the same as in Table 2.

The same way, the similarity between the RFM samples from Lai Chau and Son La can be observed (Groups II and III) due to their similarities in relation to the contents of two components resveratrol and piceid. Resveratrol appeared in the samples from Sin Ho (Lai Chau) and Thuan Chau (Son La) with the cultivation land’s height of more than 1000 m, but did not appeared in the samples from Moc Chau (Son La) with the field’s height of less than 1000 m.

In relation to the components of the samples in Group IV, there was a similarity in relation to the content of THSG, piceid, emodin, physcion and combined anthraquinone, especially, the content of THSG above 3% level-these were much higher than other samples. This information contributed to the research on traceability of RFM from Son La, Ha Giang.

Clustering analysis (CA): Cluster analysis of 48 selected samples of RFM was performed using 5 analytes (1-5) as markers, respectively (Figure 4). Their results were very similar (Figure 3), which were also in accordance with that of PCA.

This was the first study of quantitation of 5 components (two anthraquinones and three stilbenes) and combined anthraquinone in Radix Fallopiae multiflorae using fluorescence detector in Vietnam. The methods were validated for precision, accuracy and robustness, linearity and sensitivity according to ICH guidelines. The data showed good sensitivity, a wide linear range, precision and accuracy. Application of the optimized conditions for analyzing 48 RFM samples in Vietnam was shown to be useful, and the method could be used for quality control of RFM.

Copyright: © 2018 Ly NTH, et al. This is an open-access article distributed under the terms of the Creative Commons Attribution License, which permits unrestricted use, distribution, and reproduction in any medium, provided the original author and source are credited.