Leaves of Ixora undulata Roxb. were investigated phytochemically for the first time for its alkaloidal content, which resulted in the isolation of a novel unusual thiazepine alkaloid glycoside identified as 7-[(β-D-glucopyranosyl)oxy]-6-hydroxy-2-methoxy-4,5-dihydro-1,3-thiazepine and trivially named as Rubiothiazepine. Its structure was determined on the basis of 1D and 2D NMR (1H-, 13C-NMR, 1H-1H COSY, 1H-13C HETCOR, 1H-13C HMBC, 1H-15N HMBC and DIFNOE), high resolution ESI-CID-MS/MS, UV and IR spectroscopy. The isolated compound showed cytotoxic activity against EL4 (Murine Leukemia) with IC50 >100 μg/mL, and also showed cytotoxic and HIV-1 activity against MT-4 and HIV-1IIIB with CC50 >100 μg/mL and EC50 >100 μg/mL, respectively

Ixora undulata Roxb. is native to North Africa, Southern Europe and Asia, and it can be cultivated in moderate climates. I. undulata is an evergreen shrub 6 to 8 ft., it belongs to family Rubiaceae which comprises of 400 genera, from which the genus Ixora consists of 300 species; three of which were cultivated in Egypt; Ixora coccinea, Ixora finlaysoniana and Ixora undulata [1]. The genus Ixora has been used in the Ayurvedic system of medicine for a variety of ailments e.g., leaves in diarrhea, antimicrobial and anti-inflammatory; roots in hiccough, fever, scores, chonic ulcers and skin diseases; flowers in catarrhal bronchitis, dysentery, cytotoxic and antitumor principles. The aerial parts were used as central nerves system (CNS) depressant, hypothermic and semen coagulant activity [2]. Literature survey revealed little information concerning the chemical constituents, Saleh et al. [3] reported the possible presence of tannins in the plant leaves. Mohammed [4] reported the isolation of D-mannitol from I. undulata leaves, which was reported to ameliorate some metabolic disorders in schistosomal mansoni infected mice [5]. Thus, our group started the phytochemical investigation searching for the alkaloidal content of I. undulata leaves, and then evaluating the cytotoxicity of the isolates against EL4 (Murine Leukemia), and its anti-HIV-1 activity against MT-4 and HIV-1IIIB.

The leaves of Ixora undulata were collected in May 2006, from El- Orman Botanical Garden - Giza Governorate - Egypt. The plant samples were kindly identified by Miss. Tressa Labib-Head of Taxonomist Specialists at the garden, a voucher specimen (No.23) of the plant was kept at the Herbarium of El-Orman Botanical Garden.

The air-dried leaves (1.3 Kg) of Ixora undulata Roxb. leaves were defatted with pet. ether (60-80°C), then the defatted residue was extracted with hot MeOH, which was defatted once again with pet. ether (60-80°C) to completely remove all the fatty components and sterols. The residue was dissolved in distilled H2O and extracted with CHCl3 (discarded) and finally with MeOH to afford 46.66 g of the MeOH extract. 35.2 g of the MeOH extract were dissolved in 120 mL of (1:1) of MeOH − 1% HCOOH, then subjected to fractionation (8 mL injected into 10 mL loop, after prefiltration with Nylon Filter 0,45 μm) using preparative RP-HPLC (20ϕ x 250 mm, Develosil ODSHG- 5, Nomura Chemicals) at r.t. Solvent A = 1% HCOOH and Solvent B = 100% MeOH were used in the elution profile 90% A, 50% A and finally washed with 100% B, monitoring at 340 nm, with flow rate 4 mL/min. Fractions eluted with 50% A were mainly phenolics (kept for further investigation). Elution with 90% A resulted with 4 fractions (1 – 4); fraction 1 was precipitated giving D-mannitol, fractions (2 – 4) gave the characteristic orange colour with Dragendorff’s reagent. Rechromatography of these fractions (2 – 4) using the elution profile of 95% A linearly, with Rf = 0.8mL/min and u.v. 340 nm, revealed the isolation of compound 1, which was examined for its purity using TLC with EtOAc-HCOOH-AcOH-H2O (100:11:11:26) and EtOAc-MEKHCOOH- AcOH-H2O (50:30:7:3:10).

The cell line EL4 (Murine Lymphoma) was purchased from National Cancer Institute (NCI). A standard high-flux anticancer-drug screening method was employed in this study [6]. Briefly, cancer cells were plated in 96-multiwell plate (104 cells/well) for 24 h before treatment with the samples to allow attachment of the cell to the wall of the plate. Different concentrations of the samples under test (0, 1, 5, 10, 25, 50, 100, 250, 500, and 1000 μg/mL) were added to the cell monolayer, triplicate wells were prepared for each individual dose. The monolayer cells were incubated with the test samples at 37°C for 48h in atmosphere of 5% CO2. Cultures were fixed with trichloroacetic acid, then stained with sulforhodamine B and the colour intensity was measured at 490 nm by ELISA reader. All experiments were performed at least two times in triplicates. Thapsigargin (T-9033, >96%, Sigma) was used as positive potent cytotoxin with IC50 1.9 ± 0.5 μM/mL. Data were given as IC50 (μM/mL) mean ± SEM from 4 different experiments.

It was performed at department of science and biomedical technology. Cittadella University, Monserrato, Italy Samples were solubilized in DMSO at 100.000 γ and then diluted in culture medium.

HIV titration: Titration of HIV was performed in C8166 cells by the standard limiting dilution method (dilution 1:2, four replica wells per dilution) in 96-well plates. The infectious virus titer was determined by light microscope scoring of syncytia after 4 days of incubation. Virus titers were expressed as CCID50/mL.

Anti-HIV assays: The activity of tested compound against multiplication of HIV-1 wild type IIIB, N119, A17, and EFVR in acutely infected cells was based on inhibition of virus-induced cytopathicity in MT-4 cells. Briefly, an amount of 50 μL of culture medium containing 1.0 x 104 cells was added to each well of flat-bottom microtiter trays containing 50 μL of culture medium with or without various concentrations of test compounds. Then an amount of 20 μL of HIV- 1 suspensions (containing the appropriate amount of CCID50 to cause complete cytopathicity at day 4) was added. After incubation at 37°C, cell viability was determined by the 3-(4,5-dimethylthiazol-2-yl)-2,5- diphenyltetrazolium bromide (MTT) method [7]. The cytotoxicity of test compounds was evaluated in parallel with their antiviral activity and was based on the viability of mock-infected cells, as monitored by the MTT method. 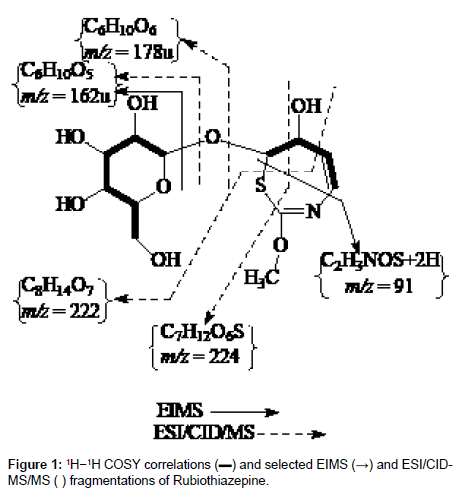 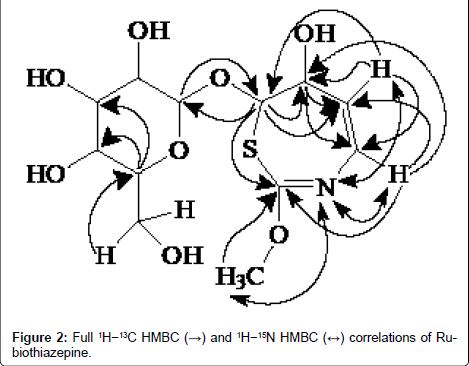 Table 1: The 1H and 13C NMR assignments of Rubiothiazepine. 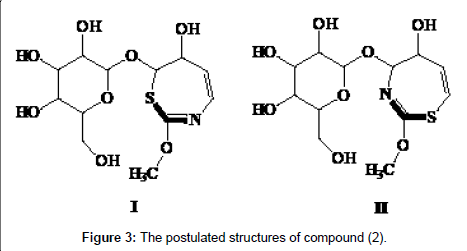 Figure 3: The postulated structures of compound (2). 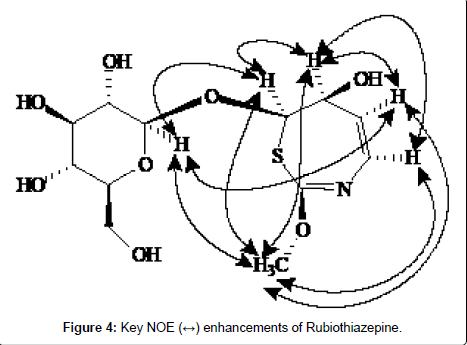 Although the Family Rubiaceae are rich in alkaloids, approximately 677 alkaloids of different structural types e.g., simple amines, piperidine/ pyrrolidine, pyridine, quinoline, isoquinoline, indole, monoterpene, triterpene, peptide, and steroidal alkaloids, were isolated and identified from 57 genera/181 species this is the first study reporting the isolation of the thiazepine type alkaloids from I. undulata leaves. Moreover, thiazepine type alkaloids are rare in nature and most of the synthesized thiazepine rings were of 1,4-type and fused with benzene, phenyl…etc. and were free of carbohydrate [11-13].

Copyright: © 2014 Mohammed MMD, et al. This is an open-access article distributed under the terms of the Creative Commons Attribution License, which permits unrestricted use, distribution, and reproduction in any medium, provided the original author and source are credited. 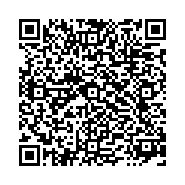