Lipids (fats and oils)-one of the major components of food which has functional properties governed by their molecular structure and intra and intermolecular interactions within the food system, and the amounts present, define the characteristics of food products. The quality of these properties includes chemical, biological and microbial factors, e.g. stability of oil, which implies their shelf life and is connected with irreversible chemical and enzymatic reactions [1].

Oils and fats which constitute human diet, is not limited to consumption purpose as past and recent researches have shown growing concerns for oils as source of material for industrial purpose [2]. The main factor for this concern is due to environmental issues that regard fossil fuel as major contributor of greenhouse gases which are characterized by trace elements such as Lead, Sulphur, Arsenic, and Carbon.

Fourier Transform Infrared (FTIR) spectrometer is one of the spectroscopic methods that is known to be a rapid and non-destructive powerful analytical tool studying edible oils and fats reference. FTIR is also an excellent tool for quantitative analysis, since the intensities of the spectral bands are proportional to concentration. For this reason, FTIR has been used to distinguish oils from different botanical origins using non-supervised classificatory techniques [3,4]. It suggests functional groups or compounds that are present which are further categorized into either saturated or unsaturated compounds. The FTIR spectroscopy has an excellent potential in providing qualitative and quantitative data for fuels including biodiesel without much rigor in sample preparation; it is used extensively as a quantitative analytical procedure for assessing edible oil quality parameter [5,6].

Hildegardia barteri is a lesser-used but primarily an ornamental tree species with one-seeded pods which has been attested to have oil contents [7,8] ranging between 19-39%. The species belongs to the family Malvaceae, having its geographical range from Ivory Coast to south-eastern Nigeria within West Africa and is called the Krobo Christmas tree. The observed oil yield values fall within the reported range for commercial vegetable oils considered suitable for commercial and industrial applications [9].

Hence, the need for explicit spectrophotometry evaluation of the oil obtained for its domestic and industrial applications potentials.

The extracted oil yield from the different samples ranges between 19.52-30.53%, having the sun dried and solvent extracted (SD+SE) sample gave the highest yield while the sun dried and mechanical extracted (SD+ME) sample gave the least yield. The difference between the yields of SD+SE and SD+ME was as a result of the extraction methods. The result corroborates the findings that solvent extraction method is known for its high yielding oil output [11]. The overall yield compares well with the report on the seed composition of kernels of H. barteri (39% oil yield) [12] and also corresponds with oil yield values that fall within the reported range for commercial vegetable oils such as cotton seed (19.50%), soybeans seed (19.0%), palm oil (48.65%) and groundnut (49.0%) [13].

Tables 1-4 are results of the FT-IR analysis performed on the oil samples, which show suggestions of likely functional groups or compounds that are present as interpreted by Pavia et al. [14].

In Table 1, compounds observed from the FT-IR analysis of oven dried and solvent extracted oil sample (OD+SE) were Alcohols (O-H), Esters (C-O) and Alkynes (C≡H). The types of bonds among the compounds found mostly were single bond. In Figure 1, the absorption peaks shown are the wave numbers which depict corresponding functional groups as interpreted in Table 1. 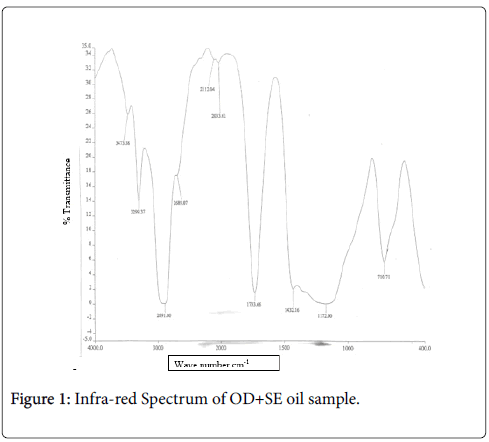 The prevalence of the single bond compounds suggests that the oil sample has more percentage of saturated fatty acid compounds than the unsaturated compounds and this is in conformity with 77.04 and 22.96% respectively for saturated and unsaturated fatty acid composition of crude fat, reported on extract from kernels of H. barteri [15] The nature of these saturated chemical groups indicates lower iodine value and higher cloud point. This depicts that the oil is an essential oil and is more stable in the presence of oxygen [16]. That is, the occurrence of oxidative rancidity in the oil sample will be low and this extends the shelf life of oils not in use. Another implication of the presence of these saturated chemical groups is that the free flow of the oil may be affected particularly during cold weather operations in that it may tend to be semi-solid.

Table 2 shows the FT-IR analysis of the (SD+SE) sample. The result suggests the abundance of C-H (stretch) aldehyde, C≡H alkynes and CH2X alkyl halide groups and the prevalence of saturated bonds in the oil sample. In Figure 2, absorption peaks shown are the wave numbers which depict corresponding functional groups as interpreted in Table 2. 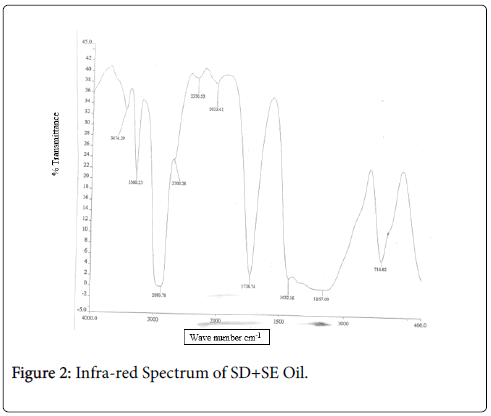 Except for the unidentified group (2330.53 cm-1) and sulphate group which may indicate undesirable contaminant in this sample, all other chemical compounds suggested to be present are similar to that of OD+SE sample. In some cases, the presence of these contaminants could be traced to desirable or undesirable chemical or biochemical reactions from the process of sun drying which may lead to changes in colour, texture, odour or other properties of food products [17,18]. However, from literature review [19], the elemental analysis carried out shows that the sulphur contained in oil of H. barteri seeds are of lower values which fall within permissible limit.

presence of more saturated chemical groups indicates higher cloud point which could affect the performance of biofuel during cold weather operations [20]. The ester C=O and alkyne C≡H groups which are characterized by unsaturated bonds, may not have significant effect in keeping the oil that could be used for production of biodiesel as reported for rubber biodiesel [13]. However, the need for injecting cold flow improver into the rubber biodiesel for better performance was suggested. This could also be applicable to the biodiesel that could be produced from H. barteri seeds. 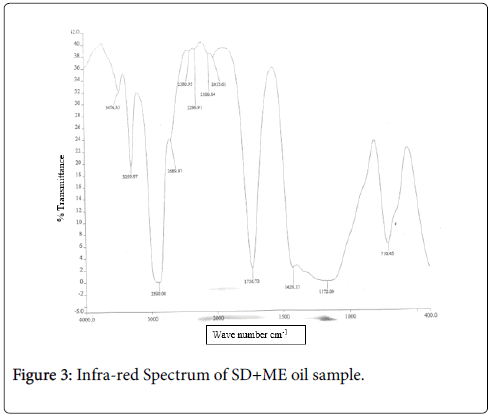 Prevalence of single (saturated) bonds indicates that the oil is a stable and not a dry oil. It is also an indication of low iodine value and higher cloud point (B100.research.com) which may affect the free flow of the fuel particularly during cold weather operations [20].

The appearance of P=O group verifies the presence of phosphate which is usually in form of phospholipids (a key component) in most vegetable oils. But the use of vegetable oils for biofuel purpose, need to be devoid of phosphorus because it tends to form harmful deposits on engine parts. However, removal of these phospholipids and reduction of phosphorus can be done through a refining processes known as degumming and neutralization [7].

The FT-IR analysis obtained in the OD+ME sample suggested the following functional groups: Alkynes (C≡C), Aldehydes (C=O or C-O) and Alkyl halides C-X. In Figure 4 appearance of absorption peaks which are the wave numbers depict corresponding functional groups as interpreted in Table 4. 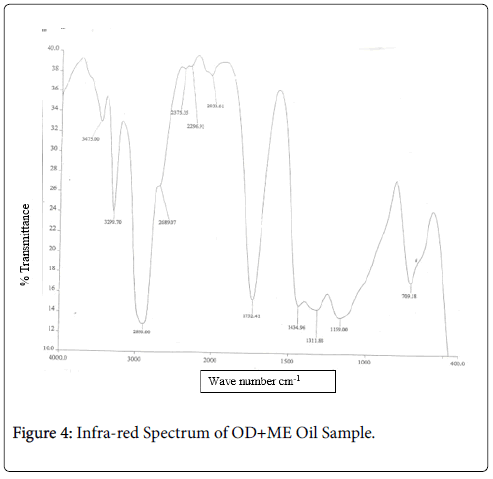 Appearances of nitriles NC and unidentified groups could indicate presence of undesirable impurities that would have contaminated the oil during handling and extraction process. Like the previous samples, the result also indicates more of saturated bonds than the unsaturated bonds in the oil sample.

The presence of single bond compounds especially alkanes indicates prevalence of properties such as cloud points that affect the performance of biodiesel during cold weather engine operation [20]. However the presence of groups with unsaturated bonds especially carbon to carbon double bonds (C=C, =C-C) which are the most abundant could cause the fuel to remain in liquid state in a cold weather condition but may be liable to possible oxidation during storage [13].

Generally, the prevalence of saturated bonds indicates that all the oil samples are essential or stable and not dry oil that vaporize.

The Fourier Transform-Infrared Spectroscopy is a standard method that studies the functional groups that are present in the oil samples of H. barteri . The presence and the nature of single bond functional groups observed, among other factors provide information on the stability of the oil and suitability for potential use for biodiesel fuel.

Observations made from the spectra analysis of the oil samples suggested prevalence of alcohols, esters, alkanes, alkynes, aldehydes and alkyl halides as common functional groups in which majority are characterized by saturated bonds. Thus, the oil from H. barteri fruit is an essential or stable oil. While oil samples with sulphate and unidentified groups which are termed impurities can be ascribed to the effect of handling and extraction methods used.

The authors are grateful to the Department of Agronomy, University of Ibadan, for given permission to harvest the fruit of the plant.

Copyright: © 2018 Evelyn AA , et al . This is an open-access article distributed under the terms of the Creative Commons Attribution License, which permits unrestricted use, distribution, and reproduction in any medium, provided the original author and source are credited.