Studies on the Flowers and Stems of Two Cocoyam Varieties: Xanthosoma sagittifolium and Colocasia esculenta

Qualitative and quantitative phytochemical composition of the flowers and stem sap of Xanthosoma sagittifolium and Colocasia esculenta were evaluated using standard methods. The result showed that the flowers contain saponins (6.61% and 5.50% respectively for the two species). Alkaloids of 6.22 and 9.80% respectively were also obtained from the result. Other Phytoconstituents like flavonoids, glycosides, phenols, steroids, and tannins were also evaluated. The proximate analysis revealed that the flowers contain high protein content (37.87% and 22.56% respectively), high moisture content and crude fat. Colocasia esculenta showed high percentage of total carbohydrate. The flowers of the two species of Cocoyam can therefore serve as spices and source of protein in local meals.

Cocoyam is a common name for more than one tropical root and vegetable crop belonging to the Arum family (Aroids) Cocoyam’s are herbaceous perennial plants belonging to the family Araceae and may belong to either the genus Colocasia or the genus Xanthosoma. There are many species of cocoyam in existence, some serve as ornamental plants (e.g., especially Xanthosoma roseum and Colossian antiquorum). While many others exist as wild plants (e.g., Xanthosoma weeksii, Xanthosoma eggersii, and Xanthosoma brasiliense, Colocasia affinis, Colocasia fallax, Colocasia heterochroma, and Colocasia gigantea) as outlined by Brown. Cocoyam species that are cultivated as food crops generally are : Taro (Colocasia esculenta) - old cocoyam and Malanga (Xanthosoma spp.) - new cocoyam These two varieties are grown primarily for their edible roots, although all parts of the plant are edible.

Cocoyam is a herbaceous perennial plant belonging to the family Araceae. It is a root crop cultivated mainly for the edible corms (tuber), although the leaves, petioles and the flowers are used in soup preparation. It constitutes one of the basic food crops of major economic importance in Nigeria. Chukwu et al. [1], stated that it ranks the third after cassava and yam in terms of total production, land area under crop and consumption. The corms can be boiled or baked and consumed in different forms as soup thickeners, pounded foo foo and can also be roasted in fire and can also be prepared as a porridge according to Ajala and Obiechina [2]. The flour of the cocoyam can also be used for the preparation of soups, biscuit, breads and puddings [3].

Reports have shown that cocoyam corm supply easily digestible starch and are known to contain substantial amount of protein, vitamin C, thiamine, riboflavin, niacin and significant amount of dietary fiber. Other part of cocoyam plant such as the leaves, flowers and stems are also consumed especially in sauces, purees, stews and soups, depending on the varieties and the local cultural traditions [4]. Therapeutic benefits of the various part of the plant had also been reported by Tuse et al. [5].

The Cocoyam flowers and stem were collected from private farms at Ogwa in Mbaitolu, Ihiagwa and Nekede all in Imo State, Nigeria. The harvested plant materials were identified and authenticated by Professor AE Ibe Department of Crop Science Federal University of Technology Owerri (FUTO), and were properly labeled as experimental samples. The samples were air dried at room temperature, grounded to fine powder (using a mill) and stored in air tight containers for laboratory analysis (Figures 1 and 2). Extraction of the plant samples

The powdered samples were extracted with 95% ethanol in Soxhlet extractor for a period of 4 hours. The extracts were concentrated on a water bath and weighed portions were used for phytochemical screening.

Proximate composition (moisture, ash, crude protein, crude fat, crude fiber) of the samples were determined in triplicate using Association of Official Analytical Chemists (AOAC) approved methods [6]. Moisture content of the sample was determined by weighing 5 g of the sample and drying in an oven at 105°C to constant weight. The loss in weight of the sample was calculated as moisture content. Ash content was determined as percentage ash content by incineration of 5 g of the samples in a muffle furnace at 550°C for 2.5 hours. The weight of the residual ash was calculated as a percentage of the 5 g that was burnt. Crude protein was determined by Kjeldahl method. Fiber content was determined by boiling 5 g of the sample in a mineral acid for 30 minutes, also in 1.25% NaOH solution for another 30 minutes and then filtered. The residue was washed, dried in an Oven and incinerated at 600°C in muffle furnace for 2 hours. Loss in weight on incineration was recorded as the fiber content. Crude fat was quantified from dried samples by Soxhlet extraction method using n-hexane as solvent and percentage fat calculated on dry weight bases [7]. Carbohydrate was estimated by difference (AOAC).

The obtained results of analysis were expressed as the mean ± standard deviation (S.D). The statistical analysis was carried out using t-test method. Difference between the means was considered to be significant at 95% confidence limit. Difference in the mean of the treatments at p<0.05 were considered significant. 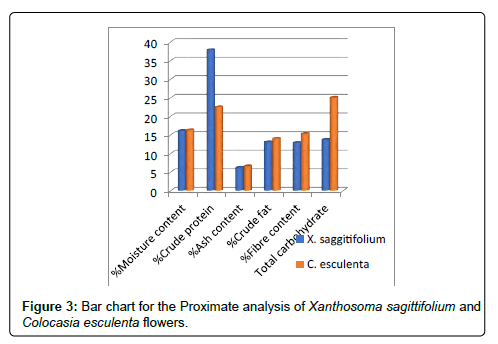 Table 1: Result of the proximate analysis of the two-cocoyam species. Values expressed as Mean ± SD.

The results of the quantitative analysis of Xanthosoma sagittifolium flower gave 6.61% saponins, 1.32% flavonoids, 6.20% alkaloids, 0.50% tannins and 1382.5 ppm of glycosides. The value of the alkaloids are relatively high while the value for flavonoids and tannins are relatively low when compared to the results of Raney et al. [21] in the analysis of nutmeg which has alkaloid (3.17%), flavonoids (4.89%) and tannins (2.23%). Analysis of Colocasia esculenta flower revealed that it contains 5.50% saponins, 3.20% flavonoids, 9.80% alkaloids, 1.26% tannins and 1372.5 ppm glycosides. The values of saponins and glycosides in Colocasia esculenta are comparatively smaller than the values in Xanthosoma sagittifolium. Statistically, there is a significant difference between these values at P<0.05. Whereas the values of flavonoids, alkaloids and tannins are higher in Colocasia esculenta than in Xanthosoma sagittifolium. At P<0.05, there is also a significant difference between the two samples Table 4. These are better expressed in the chart at Figure 4. 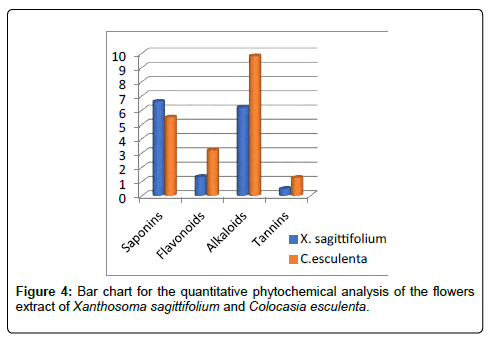 Figure 4: Bar chart for the quantitative phytochemical analysis of the flowers extract of Xanthosoma sagittifolium and Colocasia esculenta.

Analysis of the stem sap of Xanthosoma sagittifolium revealed that the saponins content is 4.71%, flavonoids is 0.51%, alkaloid is 4.31%, tannin is 1.25%, glycoside is 527.5 ppm. These values are relatively high when compared to the result presented by Olaleye et al. on the analysis of the leaves of Xanthosoma sagittifolium in which the saponins is 1.44%, tannin is 0.47%, alkaloids are 0.02%. Analysis of the stem of Colocasia esculenta as shown in Table 5 shows that the stem contains 4.20% saponins, 1.80% flavonoids, 5.50 alkaloids, 1.16% tannins and 865.8 ppm glycosides. The saponins, tannin and alkaloids contents of the stem of Colocasia esculenta are comparatively higher than the value obtained from the leaves as reported by Olaleye et al. in which saponins is 1.50%, tannin is 0.76%, alkaloid is 0.75%. Statistically, at P<0.05, there is significant difference between the values obtained for Xanthosoma sagittifolium and Colocasia esculenta. These are better expressed in the chart at Figure 5. 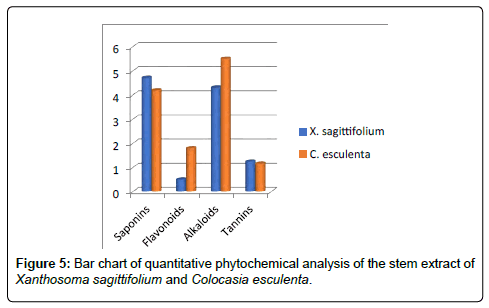 The moisture content of the two flowers was relatively higher than the FAO and USDA nutrient standards [22]. When compared to the moisture content of spices like ginger, garlic and certain pepper they were higher making them unsuitable and consequently will have a very short shelve life. The protein content was also very high when compared to the protein content of known spices and the USDA nutrient standard. High protein means high amino acid which might really be unsuitable. The ash content which is a reflection of the mineral content is within the standard of FAO and in agreement with the ash content of spice like Ashanti pepper. The crude fiber is lower than the USDA nutrient standard for crude fiber. And the total carbohydrate is lower than the carbohydrates of many of the known spices like onions, ginger, garlic, Ashanti pepper, nutmeg, rosemary and African nutmeg. These factors have made the flowers of Xanthosoma sagittifolium and Colocasia esculenta unsuitable to be packaged and marketed as a standard spice.

Copyright: ©2017 Ogukwe CE, et al. This is an open-access article distributed under the terms of the Creative Commons Attribution License, which permits unrestricted use, distribution, and reproduction in any medium, provided the original author and source are credited.