Ficus vogelii is commonly called West African Rubber Tree [1]. The leaves of Ficus vogelii are alternate and spirally arranged. They are bluish-green with pale green veins. Its fruits are sessile and yellow when ripe with a fuzzy surface [3]. Ficus vogelii produces fruits which resemble inverted flower [4].

The leaves of Ficus vogelii and Ficus asperifolia look alike externally, except for slight differences in their venation. They co-occur in most tropical and sub-tropical regions of the world. Ficus vogelii is called kujung by the Obudu people of Northern Cross River State. Its leaves are used for the treatment of diarrhea, dysentery and anemia in traditional medicine. The latex of members of the Ficus genus has been reported to give protection from physical assault by pests [5]. Ficus vogelii leaf is used by the Obudu and Bekwarra people of Cross River State as a green leafy vegetable, and as a medicinal herb in ameliorating anemia and diabetic conditions, as well as other endocrine complications.

The leaves are prepared as vegetables in soups and used traditionally in the treatment of anemia, and for well-being in adults. This is because adults believe that eating various dishes prepared with the leaves guarantees them good health and well-being. This study discovered that traditionally, there are claims that the bark and root are used in treating urinary tract infection, asthma, diabetes and malaria. This claim was supported by literature in which the bark was reported to have been used in treating urinary infection, cardiovascular diseases, and kidney diseases and cough [6].

It was on account of these claims, that we started research work on the chemical and photochemical constituents of this plant in order to relate the medicinal activities of the plant to its natural and bioactive constituents.

Fresh mature Ficus vogelii leaves were harvested from a farm in Obudu Local Government Area of Cross River State of Nigeria. The plant was then authenticated by a botanist in the Botany Department of the University of Calabar, Nigeria. Rat chow feed was purchased from Grand Cereals Limited in Aba, Abia State of Nigeria.

One kg of the leaves was washed, cut into small pieces and air-dried at room temperature (27 ± 1.50°C) for seven days. The leaves were then blended using a manual blender into coarse powder and stored in air tight plastic containers until use. 500 g of the coarse powder was macerated with 2000 ml of 80% ethanol in a ratio of 1:4 for two days.

This allowed the sample to have sufficient contact with the solvent to increase its extraction efficiency of bioactive volatile compounds. The extract was then filtered using a cheese cloth and concentrated in vacuo using a rotary evaporator to remove all alcohol and afford 55 g of the crude extract which was stored under refrigeration.

Fractionation of extract by column chromatography

Glass column chromatography was packed with silica gel (Silane 343, pore size 0.15 μm) for reverse phase fractionation of the crude extract. The packed column was washed with 30% methanol and stabilized by washing with distil water. 5 g of the crude extract was applied to the column and allowed to stand for 5 minutes. The column was then eluted with n-hexane, followed by 30% methanol to afford nhexane and 30% methanol fractions respectively. All fractions obtained were concentrated in vacuo to afford alcohol-free extracts which were later diluted 1:20 in their respective solvents for GC-MS analysis.

Diluted samples (1/20 in n-hexane and 1/20 in methanol) were injected manually through the injector port. An Agilent 6890 GC coupled with a 5973i mass spectrometer (Agilent Technologies, Palo Alto, CA, USA) was used. The GC was equipped with a HP-5MS capillary column (30 m × 250 μm i.d. × 0.25 μm, Agilent Technologies). Helium was the carrier gas with a constant flow of 1 mL/min to the column. The initial oven temperature was at 40°C, holding for 2 min, then raised to 150°C at 5°C/min; and finally raised to 280°C at 15°C/min, holding for 2 min. The injection port was maintained at splitless mode. The mass detector was operated at 150°C in electron impact (EI) mode at 70 eV. The ion source temperature was at 230°C and the transfer line temperature was maintained at 250°C. The chromatograms were recorded by monitoring the total ion currents in the 15-450 mass range. MS was detected with 2 min solvent delay. Analysis of the sample at each condition was repeated twice to ensure consistency. C6-C24 n-alkanes were ran under the same chromatographic conditions in order to calculate the retention indices (RI) of detected compounds. Identification of the oil and volatile constituents was based on retention indices relative to n-alkanes (C8- C24), and computer matching with the WILLEY 275.L library, and those contained in the NIST08 database; and confirmed by comparison of the retention times (RIs), as well as by comparison of their mass spectral fragmentation patterns with those reported in literature. 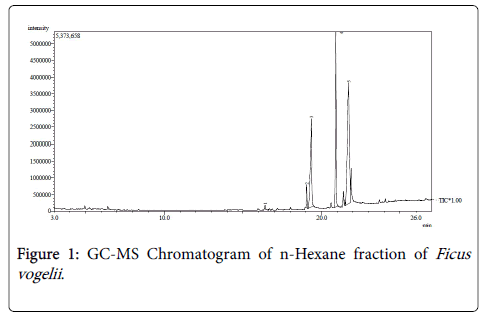 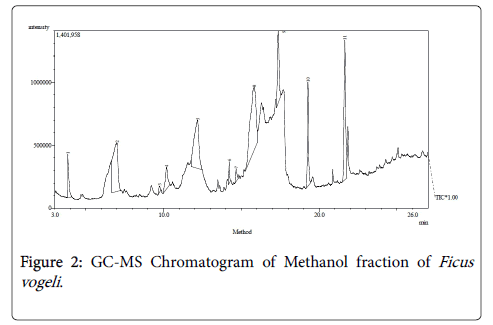 The presence of Palmitaldehyde diisopentyl acetate (2.5%) in the nhexane fraction, suggests the biogenetic origin of most of the volatile organic compounds detected in the plant. Also, Palmitaldehyde diisopentyl acetate may be the major contributing aldehydic ester to the pleasant flavor of the extracts of this plant and its nutritional acceptability by the consumers.

Oleic acid is a fatty acid that occurs naturally in various animal and vegetable fats and oils, and is classified as a monounsaturated Omega-9 fatty acid. Oleic acid has been reported to reduce high blood pressure, increase fat burning to help with weight loss, protect cells from free radical damage, and may prevent type 2 diabetes [7]. It is also said to prevent ulcerative colitis and generates brain myelin [8]. As an Omega-9 fatty acid, it contributes to reduction of HDL-cholesterol and confers protection to the heart [9].

n-Nonadecanoic acid, is a 19-carbon long chain saturated fatty acid with the chemical formula CH3(CH2)17COOH. It is found widely distributed in animal fats and vegetable oils. It is also used by insects as pheromones [10].

17α-OH-17β-Cyano-Preg-4-en-3-one is a chemical intermediate in the biosynthesis of many other endogenous steroids, including androgens, estrogens, glucocorticoids, and mineralocorticoids, as well as neuro-steroids [11,12]. It is the precursor to 17α-OH-progesterone (17α-OHP) which is an agonist of the progesterone receptor (PR) similarly to progesterone [13,14]. 17α-OHP increases in the third trimester of pregnancy primarily due to fetal adrenal production [15].

Phytol is the product of chlorophyll metabolism in plants. It is chemically called an acrylic diterpene alcohol which is used in the manufacture of Vitamin E and K. Both of these vitamins are known to play very important functions in the human body. The use of phytol in the human body is indispensable. It is essential in activating enzymes that have a positive effect in the production of insulin. It was also reported to be effective in decreasing blood cholesterol levels [16].

Hexadecanoic acid (Palmitic acid) is a saturated fatty acid and the main acid in Red Palm Oil (RPO). It is commonly found in both animals and plants. Many medical authorities, such as the World Health Organization, say dietary intake of saturated fats such as palm oil (palmitic acid) increases the risk of cardiovascular diseases [16]. However, in moderation, palmitic acid might not be entirely bad for you, as it does display mild antioxidant and anti-atherosclerotic properties, at least in animal studies. In general, diets higher in unsaturated fats are considered healthier [16].

Several sugars were extracted by the methanol fraction and these included, D-Erythro-2-deoxy-pentose sugar (2.11%), 1-Deoxy-d- Arabitol (0.56%), Ethyl-α-d-glucopyranoside (7.25%), Methyl-α-dgalactopyranoside (1.01%), Methyl-β-d-galactopyranoside (1.20%), Ethyl-β-d-Riboside (0.32%), and 1,6-Anhydro-β-D-glucopyranoside (0.12%). These sugars are glucose precursors and its isomers, which may provide energy to children recovering from anemic conditions and its complications such as PEM. The sugars may contribute to the overall well-being reported by adults consuming the extracts.

D-Erythro-2-deoxy-pentose sugar is a Deoxy-ribose sugar. The term "2-deoxyribose" may refer to either of two enantiomers: the biologically important D-2-deoxyribose and to the rarely encountered mirror image L-2-deoxyribose [17]. D-2-deoxyribose is a precursor to the nucleic acid DNA. 2-deoxyribose is an aldopentose, which is a monosaccharide with five carbon atoms and having an aldehyde functional group [17].

The study revealed the volatile organic constituents in the leaves of Ficus vogelii . It was concluded that the high content of oleic acid and phytol in the plant may be responsible for the cardiovascular benefits the plant confers on the populations consuming it.

We thank Fedorosa Catolini for the financial support given to the first author to carry out this study.

Copyright: © 2018 Igile GO, et al. This is an open-access article distributed under the terms of the Creative Commons Attribution License, which permits unrestricted use, distribution, and reproduction in any medium, provided the original author and source are credited.