18 xanthones (1-18) were isolated from the ethanol aqueous extract of Swertia mussotii. Their structures were elucidated via spectroscopic analyses including IR, UV, NMR, and MS. The nitrite scavenging activities of all the xanthones were evaluated. The results disclose that all the tested xanthones display moderate to good nitrite scavenging activity in both conditions including mimetic gastric and intestinal environment, where 18 is the most active compound with the clearance rates (%) of 26.0 ± 0.5 and 24.6 ± 0.8, respectively. The nitrite-scavenging mechanism was put forward and confirmed. A preliminary structure-activity relationship is also included here.

Swertia mussotii (SM) exists strictly on the high alpine lands of the Qinghai-Tibet Plateau at the altitudes ranging between 3200 and 3800 metres [1]. It belongs to the family of Swertia in Gentianaceae. Traditionally it is used to treat the febrile diseases in the liver and gallbladder [2]. Because of its evident effect, there have been a variety of studies on the chemical constituents and biological functions of SM. It is reported that SM mainly contains xanthones and flavonoids, together with minor constituents like iridoids, terpenes [3-8]. It is of note that xanthones, as the main component of SM, exhibit various biological and pharmacological properties such as anti-depressant, anti-leukaemic, anti-tumour, anti-tubercular, choleretic, diuretic, antimicrobial, anti-fungal, anti-inflammatory, anti-viral, cardiotonic, and hypoglycaemic activity [9-15].

As part of our on-going research into the identification of lead compounds from traditional Chinese medicine, a systematic study was initiated to investigate the chemical constituents (with a focus on xanthones) isolated from the aqueous ethanol extract of Swertia mussotii. 6 new xanthones and other known xanthones were discovered. Their antioxidant and α-glycosidase inhibitory activities have been reported [16-17].

We have noticed the report that the extract from Tibetan SM showed clearance function to NO2- [18]. But the paper didn’t point out what the exact pharmacodynamic constituent(s) was (were). We are interested in this field because of the awareness of sodium nitrite (SNT) hazards to human health. As we know, SNT is widely used in food and drug industries as a preservative and is ubiquitous in the environment. About 40% of absorbed nitrite is excreted unchanged in the urine and the metabolism of the rest is not accurately known [19]. When exposed to ingested nitrite, endogenous nitrosation may occur. The resulting N-nitrosocompounds (NOCs) have been observed to induce tumours of the kidney in animals [20,21]. Inside the body, primarily in the stomach, nitrite reacts with amines, amides or amino acids to produce NOCs, most of which are potent animal carcinogens. Therefore, scavenging ingested nitrite is probably one effective way to prevent carcinogenesis. As an example, vitamin C is traditionally used as a drug for cancer prevention partially because it is an effective inhibitor of NOC formation [22,23].

Considering that xanthones are the main components of SM, we believe that some xanthones may have the scavenging effect against NO2-. Therefore, in the current study, 18 xanthones (Figure 1) were identified from SM and their scavenging activities against nitrite were investigated. 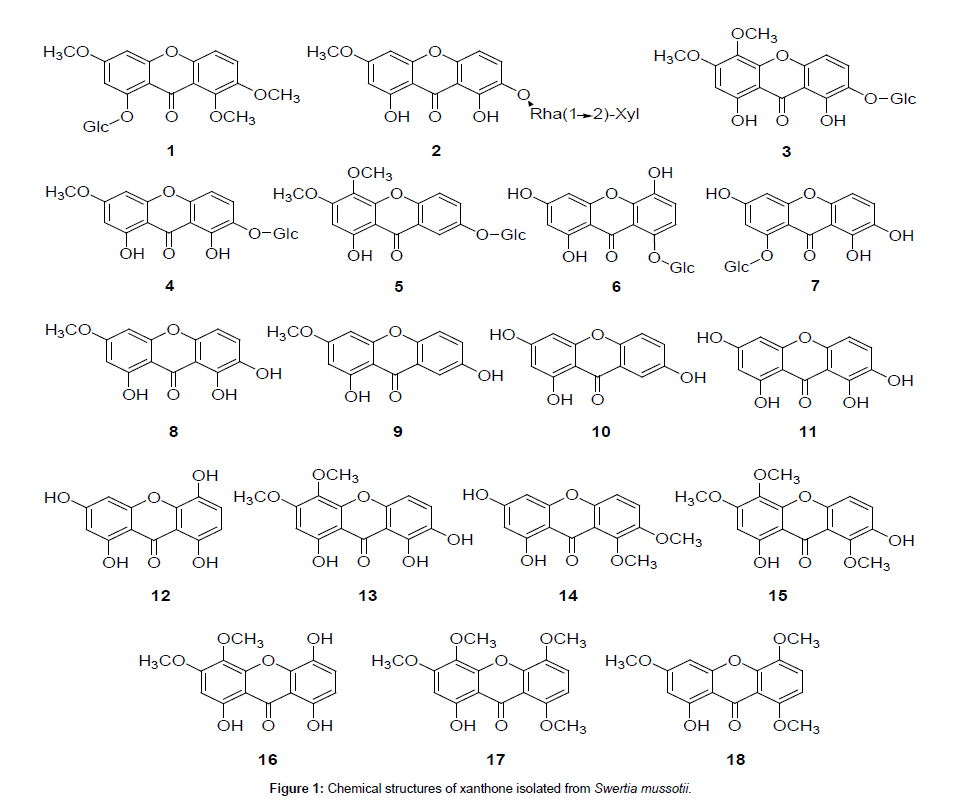 One batch of plant material (batch no. 106785) was collected from Zhongda village, Yushu County, Qinghai Province (China) in October 20, 2010. It was identified as the Swertia mussotii Franch by Dr. Jing Sun from the Northwest Institute of Plateau Biology, Chinese Academy of Sciences, Xining, China. Reference sample (vouch sample NIPB-1136) is stored at the Institute.

Nitrite scavenging activities of the xanthones were evaluated by using a UV–Visible spectrophotometer at a wavelength of 544 nm performed as described previously [24]. The conditions were modified as following: sodium nitrite (5 μg/mL), naphthyl ethylene diamine dihydrochloride (0.2% w/v), sulfanilic acid (0.4% w/v), reaction temperature 37°C, reaction time 30 min, citric acid/sodium dihydrogenphosphate buffer solution adjusts pH value of 3.0 or 7.0, and sample concentration of 3.0 mg/mL. The reaction mixture (3 mL) containing sodium nitrite (2 ml), sample solution (0.5 ml), and buffer solution (0.5 ml) (for adjusting the pH value of 3.0 or 7.0) was incubated at 37°C for 30 min. After incubation, 0.5 ml of the reaction mixture mixed with 2 ml of sulfanilic acid and allowed to stand for 5 min for completing diazotization. Then, 1 ml of naphthyl ethylene diamine dihydrochloride was added, mixed and allowed to stand for 30 min at 37°C. A pink coloured chromophore is formed in diffused light. The absorbance of sample solutions was measured at 544 nm against the corresponding blank solutions, which is distilled water.

Where Acontrol is the absorbance of solution without the addtion of sample solution.

All the assays were carried out in triplicate. The results are expressed as mean values and standard error of the mean (SEM). Results were analyzed by one-way analysis of variance (ANOVA), and significant differences were determined by post-hoc Tukey test using SPSS 11.0 software. Differences were statistically significant at P<0.05.

Nitrite-scavenging activities of 18 xanthones (1-18) were evaluated in both conditions including mimetic gastric (pH 3.0) and intestinal (pH 7.0) environment. As shown in Table 1, all the xanthones exhibited better scavenging effect in mimetic gastric environment than that in mimetic intestinal environment. Compound 18 is the best scavenger among all the tested samples with the clearance rates (%) of 26.0 ± 0.5 and 24.6 ± 0.8. Generally, xanthones with glycoside were less active than their aglycones, e.g., 6 to 12, 7 to 11; More oxygenated xanthones exhibited better activities than less oxygenated ones, e.g., 11 to 10, 8 to 9; However, xanthones with more methylation of their phenolic hydroxyl groups showed less activities, e.g., 9 to 10, 15 to 13, 17 to 16. As an exception, compound 18 is a better nitrite scavenger when compared to 12.

Table 1: Clearance effect of xanthones against NO2-.

The nitrite scavenging mechanism of xanthones was shown in Figure 2. Active intermediate NO+ produced from NO2- was captured by the xanthone, which played the role as nucleophile. For example, compound 13 scavenged nitrite under acidic condition led to the final product of either 2-nitro-1-hydroxy-3,4-dimethoxy-7,8- dihydroxylxanthone (13-1) or 5-nitro-1-hydroxy-3,4-dimethoxy-7,8- dihydroxyl- xanthone (13-2). This process was monitored by HPLC (Figure 3A and B) and the fractions were analysed by ESI-MS (Figure 3C). It was shown that the addition of sodium nitrite to the aqueous acetone solution of compound 13 resulted in a new major peak at 9.24 min (Figure 3B). The compound in this peak was confirmed as either 13-1 or 13-2, which the molecular weight was 349 (C15H11NO9) (Figure 3C). According to the scavenging mechanism, the release of nitrite cation (NO+) is promoted under the acidic condition. And the capture of nitrite is more effective than that under basic condition. The active nitrite cation reacts with xanthones producing stable and nontoxic nitro-xanthones. This prevents (or reduces) the formation of toxic NOCs. Therefore, it is reasonable to conclude that some xanthones can be applied as cancer-preventing agents.

Figure 3: HPLC profiles of compound 13 (A) and the analysis of nitritescavenged solution (B). Wavelength: 214 nm; Programme: isocratic; Eluant: methanol/H2O (70/30, V/V); Flow rate: 1.0 ml/min; The analysis of nitritescavenged solution was scheduled at 30 min after the addition of sodium nitrite to the aqueous acetone solution of compound 13. Solvent peak: acetone. (C) Mass spectrum of the peak with retention time 9.24 min. Mode of ESI: negative; Molecular formula of either compound 13-1 or 13-2: C15H11NO9 (349.04).

In summary, 18 xanthones were isolated and identified from SM. Evaluation of their nitrite scavenging effects in both conditions including mimetic gastric (pH 3.0) and intestinal (pH 7.0) environment indicated that they have moderate to good activities. Among them, compound 18 is the best scavenger with the clearance rates (%) of 26.0 ± 0.5 (pH 3.0), and 24.6 ± 0.8 (pH 7.0), respectively. The clearance capacity is related to the reactivity of xanthones with nitrite cations.

This research was financially supported by the National Natural Science Foundation of China (No. 81172982), the Guangdong Provincial Project of Science and Technology (No. 2010A030100006).

Copyright: © 2014 Mao SS, et al. This is an open-access article distributed under the terms of the Creative Commons Attribution License, which permits unrestricted use, distribution, and reproduction in any medium, provided the original author and source are credited. 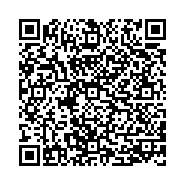