The rhubarb plant (Rheum rhabarbarum L.), which belongs to the Polygonaceae family, grows wild in Asia and is cultivated in greenhouses in many countries in the world. Rhubarb is widely used as an ingredient of food products, including pies, cakes, muffins, breads, jams and salad. In addition, rhubarb has been used as a traditional medicine in China and Japan for many years. It is an official prescription drug in Europe [1-3]. Rhubarb reportedly has pharmacological activities such as antitumoral, antimutagenic, antiinflammatory, and anticarcinogenic [4,5]. Many chemicals have been identified in rhubarb, including anthraquinones, dianthrones, naphthalins, stilbenes, galloyglucoses, anthocyanins, flavonoids, polyphenols, organic acids and acylglucose derivatives [6,7]. Among them, anthraquinones such as emodin, aloe-emodin, rhein, and physcion have been reported as components having bioactivities, such as antioxidant [1,8,9].

Recently, studies searching natural plants with antioxidant activity have become considerably more popular because the use of synthetic antioxidants, such as butylated hydroxyl toluene (BHT), have been restricted due to their toxicity [10,11]. The antioxidant scavenges reactive oxygen radicals, such as a hydroxyl radical, which cause oxidative damage to cell membranes and subsequently lead to various diseased including cancer, Alzheimer's disease, arthritis, diabetes, atherosclerosis, and AIDS [12]. Therefore, discovery of compounds having antioxidant activity in natural plants is in order.

Rhubarb was bought from a local market in Davis, California and its stalks (approximately 1 kg) were freeze dried at -48°C and 0.05 m Bar for 48 h (FreezeOne, Labconco, MA, USA). The dried rhubarb was ground in a blender to give a fine white powder (45 g).

Isolation and purification of emodin (1,3,8-trihydroxy-6- methylanthracene-9,10-dione) from dried rhubarb

Isolation of emodin from rhubarb was conducted by a slightly different method from the one used for fractionation. The fractionation method used did not provide sufficient amounts of emodin for further experiments.

The dried rhubarb powder (5 g) was dissolved in 250 mL of deionized water. The aqueous solution was sequentially extracted with 250 mL each of hexane, chloroform, and ethyl acetate using a 1 L separatory funnel. The solvent of the extracts was removed using a rotary flash evaporator to approximately 10 mL under reduce pressure. Each extract was freeze-dried at -48°C for 24 h. The amount of condensed solvent extracts was 558 mg from hexane, 169 mg from chloroform, 92.0 mg and 89.2 mg from ethyl acetate.

The chloroform extract was placed in a 15 cm × 1 cm i.d. glass column packed with 5 g of 100-200 mesh silica gel (Avantor performance materials, Inc., Philipsburg, NJ). Anhydrous sodium sulfate (1 mg) was placed on top of the silica gel to remove trace water. The column was washed with 30 mL hexane/ethyl acetate (4/1, v/v) and then eluted with 100% methanol. Methanol was removed by a rotary evaporator under reduced pressure and then purified nitrogen stream to yield 51.0 mg of purified emodin, which was stored at 5°C for further experiments.

The antioxidant activities of fractions and purified emodin were determined by analyzing MA formed from cod liver oil upon oxidation after derivatizing to 1-methylpyrazole (1-MP) with N-methylhydrazine (NMH) according to a previously reported method [17]. An aqueous solution (5 mL) containing 30 μL cod liver oil, 0.25 mmol trizma buffer (pH 7.4), 1 μmol ferrous chloride, 2 μmol hydrogen peroxide, 0.75 mmol potassium chloride and 1% surfactant SDS was incubated with various amounts of rhubarb extracts and emodin for 17 h at 37°C in a 20 mL test tube. The oxidation of the samples was stopped by the addition of 50 μL 4% BHT solution. NMH (30 μL) was added to the oxidized cod liver oil solutions, and the solutions were stirred for 1 h at room temperature. 1-MP formed in the solutions was extracted using a solid phase extraction (SPE) cartridge (MEGA BE-C18, 1 g, 6 mL, Varian, USA). 2-Methylpyrazine (20 μL) was added to the extract as a GC internal standard and the volume of the extract was adjusted to exactly 10 mL with ethyl acetate. The solution was analyzed for 1-MP using a gas chromatograph with a nitrogen-phosphorus detector (NPD). Standard antioxidants, BHT and α-tocopherol were used to verify the assay used. A blank sample was prepared without test material. Antioxidant activity (%) was calculated by the following equation:

Analysis of emodin in fractions from rhubarb

The amount of emodin in the seven fractions obtained from freezedried rhubarb was quantified by HPLC/DAD. The linearity value (R2) of the standard curve for quantitative analysis was 0.9999 for emodin. Total analysis time was 65 min. Figure 1 shows a typical HPLC of Fraction VI, which had the strongest antioxidant activity (discussed below). The retention time of emodin was 36.1 min. Identification of the emodin peak was confirmed by matching retention time and mass spectral fragmentation patterns [7,14]. Mass spectra of emodin was compared with the literature for the identification in the ESI negative ion mode (m/z=269). 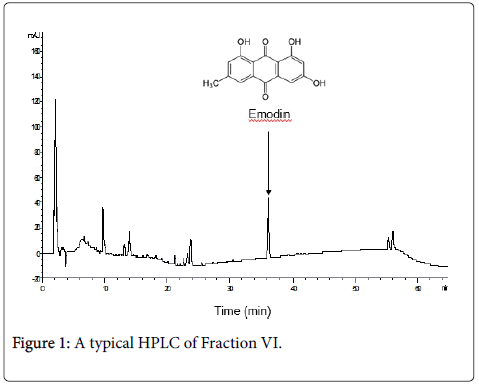 The total phenolic content was determined according to Folin- Ciacalteu’s method [18]. Briefly, 0.1 mL of each fraction (500 μg/mL) was added to a 2% sodium carbonate solution (2 mL) and allowed to stand for 3 min. After addition of a 50% Folin-Ciacalteu’s solution (0.1 mL), it was allow to stand for 30 min at room temperature. After the reaction, the absorption activity was measured at 760 nm using a UVvisible spectrophotometer. All experiments were carried out in triplicate. Total phenolic content was calculated using a calibration curve with gallic acid. The result was demonstrated with mg gallic acid equivalent/g extract.

An Agilent model 1100 HPLC series (Agilent Technology, Palo Alto, CA) equipped with a reversed phase column (Capcell pak C18, 75 mm × 4.6 mm, 3 μm, Phenomenex, Torrance, CA) and a diode array detector (set at 280 nm) was used for emodin anlysis. The injection volume was 10 μL and flow rate was 0.4 mL/min. The mobile phase consisted of 0.1% acetic acid in water and methanol (solvent A) and acetonitrile (solvent B). The linear solvent gradient was from 5% B to 100% B in 65 min. Emodin was identified using an Agilent model 1100

HPLC interfaced to an Applied Biosystems API 2000 MS/MS via an electrospray ionization (ESI) source operating in the negative ion mode at 400°C with nitrogen gas. The MS was operated in full scan mode within the range of m/z 50 to m/z 1000 and the extracted ion (m/z 269) was used for confirmation of emodin.

A standard curve for emodin quantitation was prepared using different concentrations of standard emodin (0.5, 1, 5, 10, 25, 100 μg/mL) in HPLC grade acetonitrile, and each solution (10 μL) was injected into HPLC. Quantification of emodin was performed with an external standard calibration curve using peak area with non-weighted linear regression.

An Agilent Model 6890 GC equipped with a 30 m × 0.32 mm i.d. (df=0.25 μm) DB-WAX bonded-phase fused silica capillary column (J and W Scientific) and an NPD were used for the analysis of 1-MP for the GC/MA antioxidant assay. The injector and detector temperatures were 250°C. The oven temperature was programmed from 60°C to 160°C at 4°C/min and then held for 2 min. The linear velocity of the helium carrier gas was 28 cm/sec at a split ratio 20:1.

Figure 2: The antioxidant activity of seven fractions obtained from rhubarb. 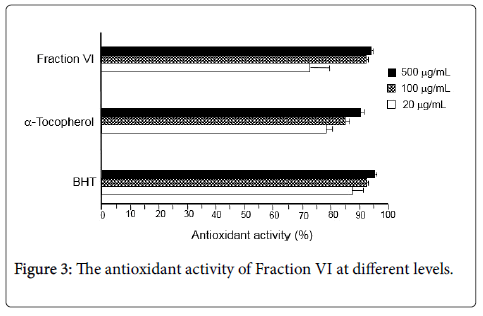 Figure 3: The antioxidant activity of Fraction VI at different levels. 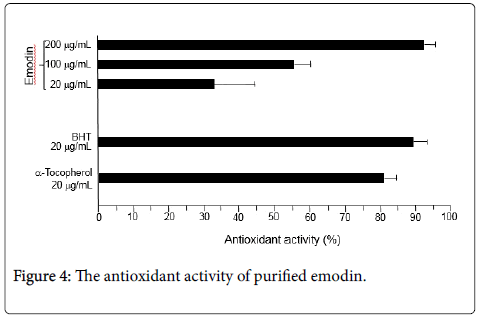 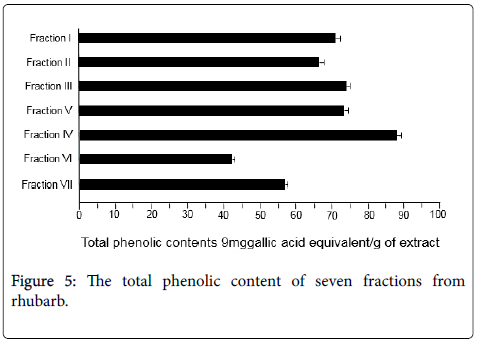 Figure 5: The total phenolic content of seven fractions from rhubarb.

Copyright: Â© 2018 Won Jang H, et al. This is an open-access article distributed under the terms of the Creative Commons Attribution License, which permits unrestricted use, distribution, and reproduction in any medium, provided the original author and source are credited. 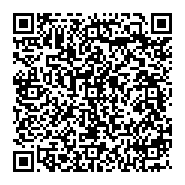