Bryophyllum pinnatum (Lam.) Synonym Kalanchoe pinnata (Lam.) is a perennial herb growing widely and used in folkloric medicine in tropical Africa, India, China, Australia and tropical America [1-4]. Classified as a weed, the plant flourishes throughout the Southern part of Nigeria. A number of active compounds, including flavonoids, glycosides, steroids, bufadienolides and organic acids, have been identified in Bryophyllum pinnatum [3]. Its bufadienolides are structurally similar to Cardiac glycosides and have demonstrated in clinical research to possess antimicrobial, antifungal, anticancer, anti tumour, insecticidal actions. It also possess other activities like anti-ulcer, anti-inflammatory and analgesic, antihypertensive, hepatoprotective, Nephroprotective, diuretic, antidiabetic, anticonvulsion, antioxidant, uterine relaxant, muscle relaxant and neurosedative activity and tocolysis activity [5,6]. Bryophyllum pinnatum is used in ethno medicine for treatment of earache, burns, abscesses, ulcer, insect bites, diarrhea and Lithiasis [1]. In South Eastern Nigeria, this herb is used to facilitate the dropping of the placenta of a newly born baby [1]. In traditional medicine, its stem, leaves and the whole plant have been extensively worked on while there is limited work done on the root of Bryophyllum pinnatum. The present work focus on the root of Bryophyllum pinnatum to test for amino acids and peptides, evaluate its antioxidant property and determine chemical constituents that could be present in the root.

Bryophyllum pinnatum (Lam) were collected in the month of April (2014) at Erifun village besides Afe Babalola University, Ado- Ekiti. Identification was done in the department of Botany, Ekiti State University, Ado-Ekiti.

The collected roots were dried at room temperature for about two months. The dried roots were pulverized by a mechanical grinder. Extraction was done using ethanol. It was filtered and the filtrate was concentrated to dryness in vacuo to obtain the crude ethanol extract.

Crude ethanol extract (20 g) was dissolved in 5% ethanol and subjected to column chromatography. Elution was done using hexane, ethylacetate (95:5) ml in gradient. The elute in each test tube was tested on TLC. Tube fractions with similar TLC characteristics were pooled together and further subjected to column chromatography to obtain a pure spot (BPR001) on TLC plate. BPR 001 was a darkish green substance with r.f 0.65. It had an antioxidant activity. It was showing as a deep pink reacting substance on silica with vanillin sulphuric acid.

DPPH scavenging method: The test samples (2 ml extract solution in ethanol) were mixed with 4 ml solution of DPPH in methanol) and different concentrations (0.2-1 mg/ml) were prepared. After 30 min at room temperature, the absorbance values were measured at 517 nm and converted into percentage of antioxidant activity. Ascorbic acid was used as a standard. Each assay was repeated thrice and recorded as mean of the triplicate.

1% ninhydrin was dissolved in 17 ml of glacial acetic acid and 83 ml of pyridine. The solution served as a spraying reagent on thin layer chromatography plate. 2 ml of hexane was used to dissolve the crude extract of Bryophyllum pinnata root and was spotted on thin layer chromatography plate. After spraying, the plate was now incubated in the oven for 100°C for 5 minutes.

The GC-MS analysis of Bryophyllum pinnata root extract was performed using a Clarus 500 Perkin Elmer gas chromatography equipped with a Elite-5 capillary column (5% phenyl 95% dimethylpolysiloxane) (30 nm × 0.25 mm ID × 0.25 μmdf) and mass detector turbomass gold of the company which was operated in EI mode. Helium was the carriers gas at a flow rate of 1ml/min. and the injector was operated at 290°C and the oven temperature was programmed as follows; 50°C at 8°C/min to 200°C (5 min) at 7°C/min to 290°C (10 min).

The DPPH test intends to measure the hydrogen atom or electron donor capacity of the extracts to the stable radical DPPH formed in solution [7]. The activity was expressed as the concentration of sample necessary to give a 50% reduction in the sample absorbance (IC50). Extract exhibited considerable DPPH free radical scavenging activity as indicated by their IC50 values of 2.35 mg/ml (Figure 1). 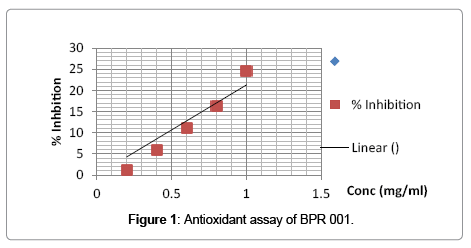 Reddish spots appear after heating for 5 minutes; this indicated the presence of either amino acids, amines or amino sugars (Figure 2). 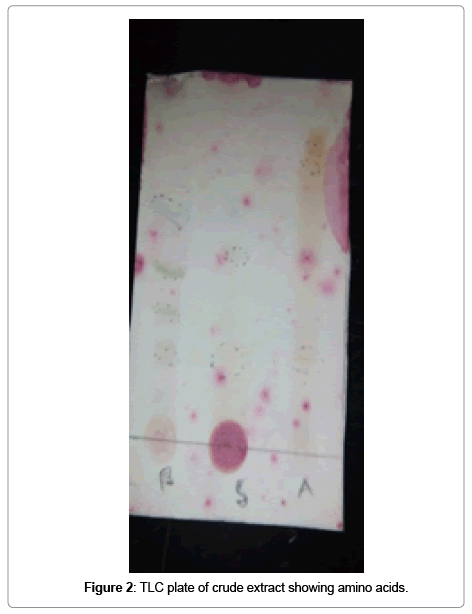 Purple spots showed after spraying while reddish spots appeared after heating for 20 minutes. The reddish spots were still maintained after leaving it in the oven for1hour.This indicated the presence of peptides (Figure 3). 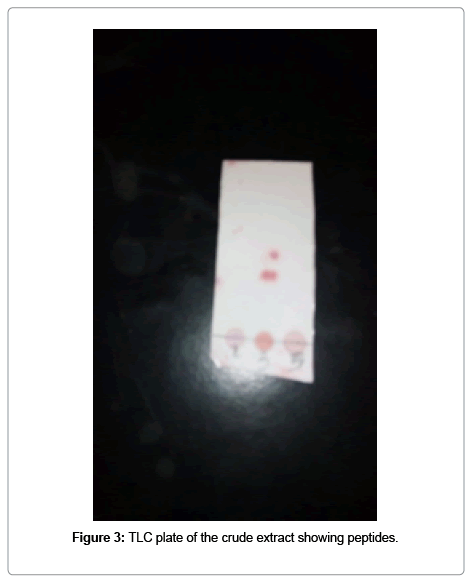 The crude extract and the BPR001 showed antioxidant activity which authenticate the medicinal folklore of the plant and is still in line with the uses of the compounds isolated from it. The compounds isolated from it serve as preservative of food in industry. Further work could still be done on it to isolate more compounds that can be useful in the industry and to isolate individual amino acids or peptides present in the root.

Copyright: © 2015 Orisakeye OT et al. This is an open-access article distributed under the terms of the Creative Commons Attribution License, which permits unrestricted use, distribution, and reproduction in any medium, provided the original author and source are credited. 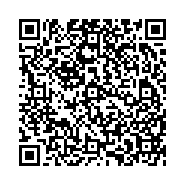