Present study describes micro-propagation of traditionally important medicinal plant in northern interior part of Karnataka, Caralluma adscendens var. fimbriata, for its conservation. Results showed that the survival ability of regenerated plants was 84 per cent. Proliferation of C. adscendens var. fimbriata shoots was achieved on medium supplemented with various concentrations of different hormones. The effective combination of 6-Benzylaminopurine (BA) 2.0 mg/l along with 0.5 mg/l kinetin (Kn) and 0.2 mg/l Indole-3-acetic acid (IBA) produced highest number of shoot sprouting frequency (91%) with a mean of 2.60 ± 0.17 shoot number per explants and a mean shoot length of 3.88 ± 0.20 cm from the mature nodal explants. A good frequency of callus was induced in 1.5 to 2.0 mg/l of 1-Naphthaleneacetic acid (NAA) and in 2.0 mg/l of 2,4-dichlorophenoxy acetic acid (2, 4-D) were transferred to root induction media. The NAA showed positive response of rooting when compared with IAA and IBA in the present study. The best root and shoot sprouted plants were successfully acclimatized in the greenhouse and transferred to open field conditions. This micropropagation protocol can be successfully used for large-scale multiplication and conservation of germplasm of this threatened plant.

All the species of Caralluma prefer dry conditions and decay when exposed to excess of water. It is commonly grows on sloppy areas and found amidst boulders (rock crevices) and some grows midst of thorny bushes [4]. The thorny shrubs support the growth, development and protection of Caralluma (Sl). Several species of Caralluma are consumed as famine food and has several medicinal properties like anti-inflammatory, anti-nociceptive, anti-ulcer, anti-diabetic, carminative, febrifugal, anti-pyretic and antioxidant property [5]. The extract of C. adscendens var. fimbriata , are used in the form of capsules “GENASLIM” for body weight loss [6].

These plants due to their several medicinal values are fast disappearing and are threatened to become rare due to indiscriminate collection and over exploitation by the pharmaceutical industry, agriculture, mining activities, and lopping for fodder [7]. Advantage of excellent tools of biotechnological methods for culturing plant cells and tissues offers a useful means for conservation and propagating valuable, rare and endangered medicinal species. Large numbers of medicinal plants have been successfully employed for in vitro culture technique are Fabiana imbricate [8], Thapsia garganica [9], three varieties of Caralluma adscendense [10], Caralluma stalagmifera [11] and Caralluma edulis [12]. BA is a synthetic cytokinin that deduce plant growth and development responses by stimulating cell division. The effect of BA on multiple shoot bud differentiation has been demonstrated in a number of cases using a variety of explants [13]. In this study, 6-Benzylaminopurine (2.0 mg/l) in combination with kinetin (0.5 mg/l) and Indole-3-acetic acid (0.2 mg/l) produced highest number of shoot sprouting frequency (91%) from the mature nodal explants. Kn as a growth regulator enables the production of stock plants. Along with addition of 2,4-dichlorophenoxy acetic acid (2,4-D) in the medium, Kn exhibits significant percentage response, number of shoots per explant and shoot length [14]. In the present study, Kn (2.5 mg/l) in combination with BA (2.0 mg/l) inducted shoot multiplication and well developed sprouting frequency of shoots at an enhanced pace by subsequent cultures were observed which is in agreement with the earlier reports on other Asclepiadacean medicinal plants, such as Gymnema sylvetre [15] and Hemidescus indicus [16]. NAA is a most favored auxins for shoot culture has been used this study at different concentrations (0.2 to 1.0 mg/l) along with 2, 4-D have produced swollen shaped callus, dedifferentiated and developed into friable callus culture and well-formed embryoid. With combination of BA (1.0 mg/l) and IAA (0.2 mg/l), NAA (0.1 mg/l) produced a maximum number of shoots with sprouting frequency of 2.87 ± 0.21 from callus. A good frequency of callus was induced in 1.5 to 2.0 mg/l of 1- Naphthaleneacetic acid (NAA) and in 2.0 mg/l of 2,4-dichlorophenoxy acetic acid (2, 4-D) were transferred to root induction media. The NAA showed positive response of rooting when compared with IAA and IBA in the present study. The NAA showed positive response of rooting when compared with IAA and IBA in the present study. The best root and shoot sprouted plants were successfully acclimatized in the greenhouse and transferred to open field conditions.

In present study we aimed to develop an efficient in vitro method for conservation and mass propagation of Caralluma adscendens var.fimbriata through nodal segment culture and callus to somatic embryogenesis, followed by successful restoration of the micropropagated plants into field conditions in North interior part of Karnataka, India.

Plants of C. adscendens var. fimbriata were collected from scrubby vegetated habitats of Alrameswara and Ramagiri villages of Chitradurga District (Figure 1a) are potted and maintained in polyhouse, Department of Applied Botany, Kuvempu University, Shivamogga, Karnataka. Mature shoot segments with six to eight inter nodal plant segments were collected from the polyhouse and washed with running tap water for 15 min to remove the soil particles and other extraneous fine particles. The internodes were rinsed with 1% (v/v) Tween-20 (Merck) for 5 min with constant agitation. Then they were rinsed in distil water thrice. The plant materials were immersed in 30 percent ethanol for 3 min and again washed with sterilized double distilled water followed by 0.1 per cent (v/v) HgCl2 treatment for 5 min. Finally, the explants were thoroughly rinsed with sterile double distilled water for 2 to 3 times, and they were trimmed into pieces of about 0.6 mm to 1 cm and then inoculated on to MS (Murashige and Skoog, HiMedia) media, containing 3 per cent (w/v) sucrose and 0.8 per cent of agar. The pH of media was adjusted to 5.8 prior to autoclaving at 121ºC for 20 min.

Inoculations were carried out in a laminar airflow chamber to maintain aseptic sterile environment. The mature stem explants inoculated were incubated in the culture room. The cultures were maintained at 2000 lux light under cool white, fluorescent tubes. The photoperiod was adjusted as 16 h light and 8 h dark diurnal cycle by using an electric timer. The temperature was adjusted about 25 ± 2ºC by means of air conditioners.

Shoot induction: For shoot induction, the nodal explants were cultured on MS medium supplemented with various plant growth regulators like (BA) and (Kn) at different concentrations (0.5, 1.0, 2.0, 3.0 and to 5.0 mg/l). The induced shoots were sub-cultured on to the fresh medium after every month. The frequency of shoots produced from explants, the number of shoots per explants and the shoot length were recorded after six weeks of culture.

Callus induction and multiplication: Internodal segments of C. adscendens var. fimbriata were cultured on MS medium fortified with different auxins, like 2, 4-D and NAA at different concentrations (0.1 to 1 mg/l). The tissues were sub-cultured on fresh medium once after every month. The frequency of explant produced into swollen shaped callus and well formation of embryos were transferred to fresh MS medium supplemented with different concentrations of NAA, IAA and BAP (0.1 to 0.5 mg/l). The initiation of mature shoots from the callus was recorded after 16 days.

Root initiation and multiplication: The shoots regenerated directly from explants with 4 to 5 cm in length and shoots induced by callus with 2 to 3 cm in height were separated and individual shoots were transferred for rooting to half-strength MS medium containing different concentrations of NAA, IAA and IBA. Observations were made for the number of roots, and their lengths were measured.

Acclimatization and transplantation of plantlets: The well rooted plants with 3-5 leaves were carefully removed from the culture tubes and washed under running tap water to remove traces of agar. Then, the plantlets were planted onto plastic pots containing a cocopeat, cocopeat with sand and cocopeat with soil. The plastic pots were covered with transparent polythene cover to maintain humidity until the development of new rudimentary leaves and sprouting of new roots. After one month, the surviving plants were transferred to plastic pots under the green house containing forest natural soil followed by pouring of tap water for every alternative day maintained under green house condition. After one month, the frequency of survival was calculated.

Statistical analysis: The experiments were set up in a ten replicates in completely randomized design and data was collected after 2 months of inoculation. Data was analyzed to detect significant differences among the means [17], Variability in data has been expressed otherwise as mean ± standard error.

Results of micro propagation showed that cultural conditions were found to influence the pattern of growth during in-vitro regenaration of C. adscendens var. fimbriata stem explants.

All concentrations of BA and Kn showed the best morphogenetic response and shoot sprouting frequency. MS medium containing BA was more effective than Kn for inducing proliferation of auxiliary buds as in previous reports [18-20]. However, the multiplication of the shoot sprouting frequency and shoot length showed immense responses supplemented with different concentration of the growth regulator BA (0.5, 1.0, 1.5, 2.0, 2.5) and Kn (1.0, 1.5, 2.0, 2.5, 3.0) respectively (Table 1).

The value of BAP & Kn hormones consisted of mean±SE of 15 replicates. The F value is significantly different when P<0.01.

In the present study, the combination of BA (2.0 mg/l) and Kn (2.5 mg/l) resulted in the induction of shoot multiplication and welldeveloped sprouting frequency of shoots. The shoot multiplication at an enhanced pace by subsequent cultures were observed in the study is in agreement with the earlier reports on other Asclepiadacean medicinal plants, such as Gymnema sylvetre [15] and Hemidescus indicus [16]. Low concentration of Kn (1.0-2.0 mg/l) and BA (0.5 mg/l) yielded the suppression of shoot sprouting and number of shoots per explants. We have found that BA and Kn growth regulators showed the best morphogenic response and shoot sprouting frequency. MS medium containing BA was more effective than Kn for inducing proliferartion of axillary buds. Also, 2, 4 D and NAA different concentrations auxins frequency with explant produced swollen shaped callus and well-formed embryoid. The survival ability of regenerated plants was 84 per cent [10], where 65% survival rate was found in C. adscendens var fimbriata

Influence of cytokinins with auxin on shoot multiplication

The value of each combination consisted of mean±SE of 15 replicates. The F value is significantly different when P<0.01 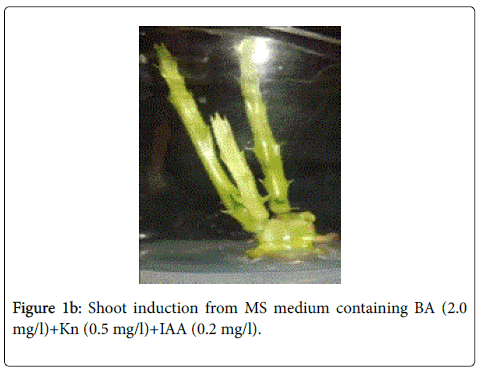 Slices of tender succulent shoots cultured on various concentrations of 2.4 D (0.5 to 2.0 mg/l) and NAA (0.5 to 2.0 mg/l) became swollen, dedifferentiated and developed into friable callus after two weeks of culture. Globular embryos were formed directly on the surface of the callus within 3 weeks of culture (Figure 1e). The combination of BA (1.0 mg/l), IAA (0.2 mg/l) and NAA (0.1 mg/l) produced a maximum number of shoots with sprouting frequency of 2.87 ± 0.21 from callus (Figure 1f). 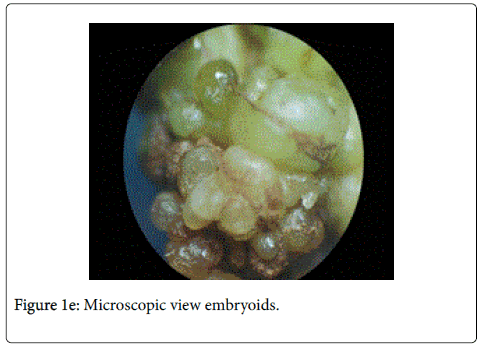 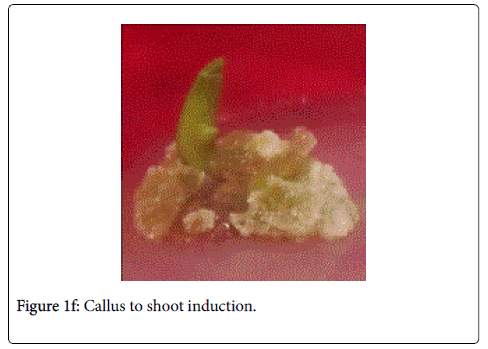 Hormone 2, 4-D at 1.5 mg/l showed maximum frequency of callus formation. The callus thus formed were cut into small fragments and cultured on the same induction medium. 2, 4-D (2.0 mg/l) and BA (0.1 mg/l) are needed for callus induction in Asclepias tuberosa [25]. In case of an Asclepiad, Tylophora indica produced callus on 2, 4-D hormone [13] and Hemidesmus indicus on BA cytokinine [26]. 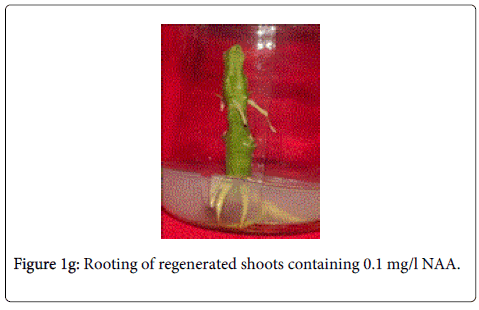 The value of each combination consisted of mean±SE of 10 replicates. The F value is significantly different when P<0.01.  CP-Callus production

Development of roots per shoot varied with different treatments. Optimum rooting and growth of shoots were observed on half strength MS medium (Table 4) (Figures 1g and 1h). Well-developed root and shoot plantlets were washed with sterile distilled water to remove residual media and transferred to pots containing cocopeat, Cocopeat+ sand and Cocopeat+soil (Figure 1i). After 20 to 25 days plants grown on established well cocopeat when compare with other mixtures. Fully grown plantlets shifted to natural forest soil in green house under controlled conditions (Figure 1j). The plantlets resumed good growth after 4 weeks of transplantation. A total of 84 per cent plants survived were shifted to greenhouse condition for hardening. After 25 days, these plants were planted under the canopy of associated Canthium purviflorum plants.

The value of each combination consisted of mean±SE of 10 replicates. The F value is significantly different when P<0.01

Table 4: Rooting response of in vitro regenerated shoots of C. adscendens var. fimbriata in half strength MS media containing NAA, IAA and IBA in various concentrations with 1% sucrose after one month of culture. 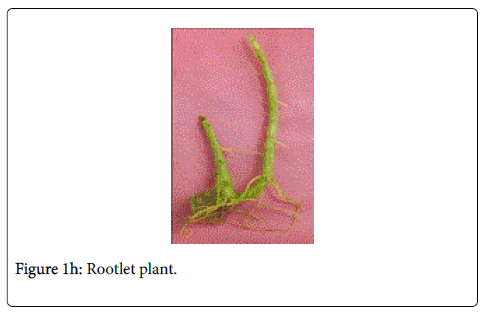 The authors would like to thanks to University grant commission, New Delhi for to Rajiv Gandhi fellowship to Ramachandra Naik for financial support to conduct this research.

Copyright: © 2017 Ramachandra Naik M, et al. This is an open-access article distributed under the terms of the Creative Commons Attribution License, which permits unrestricted use, distribution, and reproduction in any medium, provided the original author and source are credited. 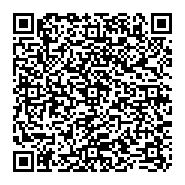